Authors Anastasia Miari and Iska Lupton write a piece for Female First upon the release of their new book Grand Dishes. 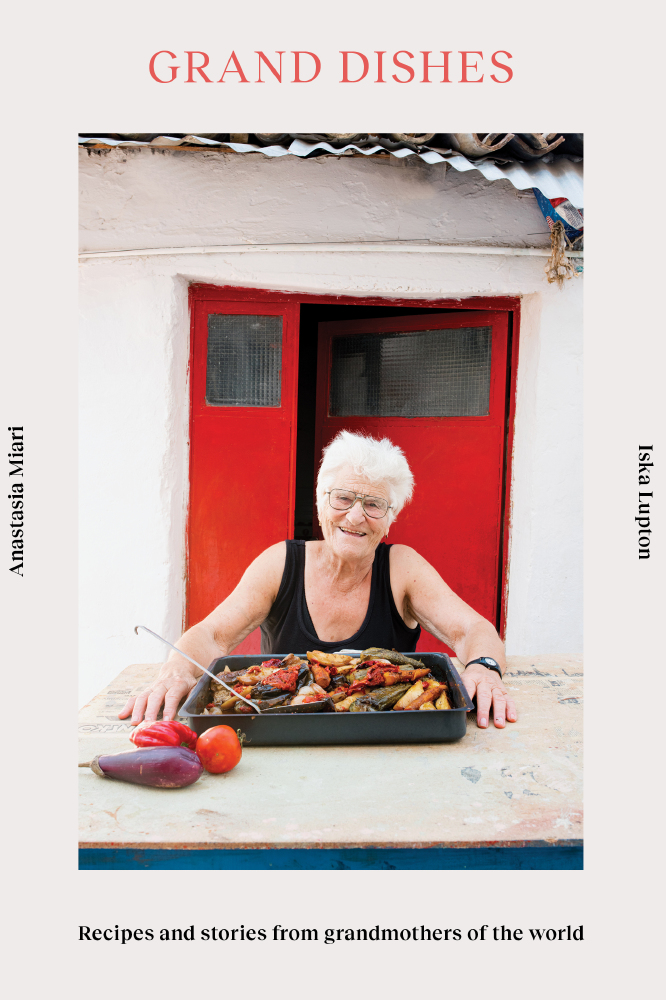 The secret to eternal youth

Having launched this project with our own grandmothers, Rajni was our first ‘unknown’ granny. We drove to Leicester to cook with her, trusting the insistence of her granddaughter that she was a culinary legend. It was true. We went straight into the kitchen, already filled with the scents of popping mustard seeds and curry leaves. She casually made three curries, lassis and dessert in a sort of narrated performance, wearing a beautiful turmeric-coloured sari. We asked how on earth she kept her skin so silken. She stopped, pointed at us with a hard stare and said ‘yoghurt, yoghurt, yoghurt’.

The secret to great Mediterranean feasts

This project began at the white-washed home of Anastasia’s grandmother Yiayia on the island of Corfu, Greece. We were on a mission to capture her recipes, with the vague notion of making a recipe book. Yiayia cooked sea bream and skordalia (a potato and garlic dip) and threw together a Greek salad of postcard perfection; a slab of Feta and a sprinkle of oregano sitting on top of homegrown chunky tomato and cucumber slices. In her outhouse kitchen we watched her fill a frying pan with one inch of home-made, thick, green beautiful olive oil and then throw the hand-cut potatoes in. They were extraordinary. We’ve had many meals with Yiayia and every time it’s the dishes lathered in her own olive oil that send us mad with love for the Med.

The secret to sticky goodness

We met Nonna Dora on the island of Sicily. She was the head chef at Rocce Delle Tre Contrade, an elegant villa encircled by lemon groves, standing on a hill between the Mount Etna and the Ionian Sea. The garden was full of round, regal-looking aubergines and tomatoes weighing down the vines. This is where Dora taught us her recipe for the Sicilian classic: caponata. It’s an aubergine salad best served warm on little toasts for aperitivo. She seasoned with abandon and would taste constantly until happy. Her pomodoro sauce was a sensation due to the addition of salt and sugar to take any bitterness from the passata. Her caponata also required a generous mix of salt and sugar to ensure it was suitably sticky, sweet, salty and sour in equal measure.

The secret to tender octopus

On the island of Hvar we went to cook octopus salad with Nona Flora. She met us off the ferry in a very stylish striped straw hat and cool circular sunnies. We knew it was going to be fun. Our octopus came from a local chef called Car, who allowed her to buy a couple of his prized octopus. She pulled it from the freezer and we walked down to the sea to thaw it in the salty water. Frozen octopus cooks much quicker than fresh and doesn’t lose any flavour. Even if fresh, Flora told us, it’s better to freeze it because the ice breaks the muscles down making it more tender. In her blue-tiled kitchen, we began cooking the octopus and were given a final piece of total-tenderisation advice; add two wine corks to the cooking water with the octopus. It is one of our favourite recipes to recreate, and corks are present every time.

The secret to making food memories

So many of our grannies talked about the symbiotic nature of cooking and eating with their children and grandchildren. Through all the women we met, we learnt the significance of engaging in a process together, of passing on knowledge and tradition through food. Gloria, a wondrous Colombian grandmother we cooked with in Wales made us Ajiaco; a traditional chicken soup with 5 varieties of potato, corncobs and avocado on top. The dish was a true extension of her - warm and bright with hidden depths and rich context. She talked about the therapeutic process of cooking with family and the power of sitting down to eat together. ‘It’s like a life force that comes out’, she said, ‘It doesn’t have to be a complicated meal that you make. It’s just the act of taking time off, to just sit together and converse’.