Britain at War in Colour by Ian Carter is filled with evocative snapshots of war at sea, on land across Europe, and in the air, as well as life for civilians across the UK.

Colour photography has a unique ability to bring history to life. As we consider the Second World War soon fading from living memory, and conversely the many lessons we have to learn from that period of time. Britain At War In Colour is filled with evocative snapshots of war at sea, on land across Europe, and in the air, as well as life for civilians across the UK, these photographs were taken on Kodachrome colour film by the Ministry of Information during the war; they are remarkably candid for official government images. 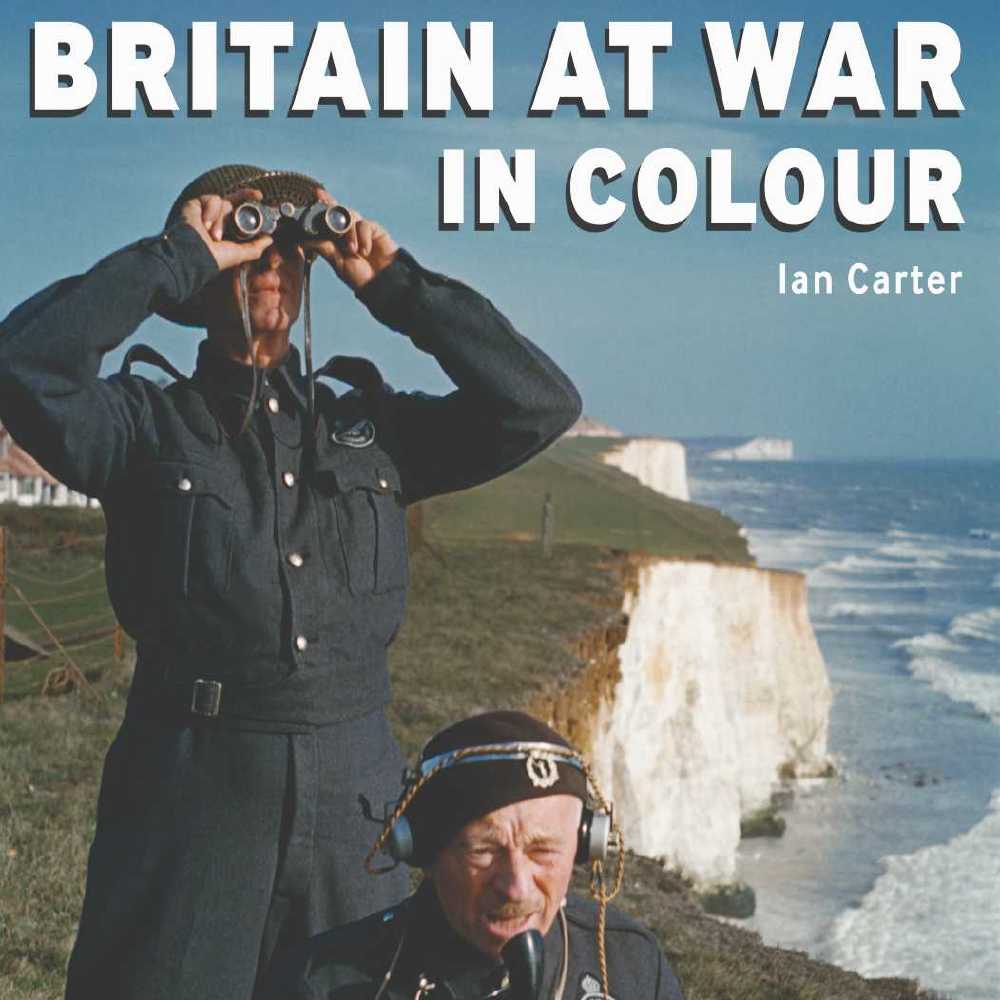 Britain at War in Colour

‘Lumber Jills’ working at the Women’s Timber Corps training camp at Culford, near Bury St Edmunds in Suffolk, 1943. Here, instructor Peggy Barnett guides two of her trainees. The Women’s Timber Corps was part of the larger Women’s Land Army, and was set up in March 1942 in response to a shortage of imported timber for items such as pit props and telegraph poles. Duties included felling, crosscutting and sawmill work. The Women’s Land Army itself was established in 1940 to help replace those farm labourers called up for military service. Recruitment ended in 1943, by which time 87,000 women were serving on the land.

A nurse with young child evacuees in the gardens of Tapeley Park, at Instow in North Devon, October 1942. The country house was used to accommodate 50 children evacuated from Plymouth after a series of Luftwaffe bombing attacks in March and April 1941.

Members of the Princess Mary’s Royal Air Force Nursing Service with convalescent aircrew at RAF Hospital Halton, Buckinghamshire, August 1943. The RAF’s nursing service was established in 1918, and received official patronage – and the royal prefix – from Princess Mary, daughter of King George V, in 1923. It was a women-only organisation at the time, with nurses serving in RAF hospitals and station sick quarters in Britain and overseas.

A worker milling breech blocks for Sten submachine guns at a small engineering works ‘somewhere in the south of England’, 1943. The Sten gun was designed to be cheap and quick to make from simple stamped metal components, with the minimum of machining. Each one cost about 15 shillings (£30 in today’s money) and required an average of 5 man (or woman) hours to produce.

WAAFs sewing parachute canopies which will be used by British airborne forces during the Allied invasion of Europe, May 1944.

Women at work in an underground munitions factory at New Brighton on the Wirral, Merseyside, 1945. The factory was located in underground tunnels and caverns originally used by smugglers and then re-discovered during the construction of the New Brighton Palace amusement arcade in the 1930s.

Lance Bombardier Jack Grundy of 128th Field Regiment, Royal Artillery, with his wife Dorothy while on leave at the family home in Irby, Cheshire, April 1944. The couple, and their children Randall and Gilda, featured in a Ministry of Information photo story, which followed Jack’s period of seven days leave.

‘Wrens’ (members of the Women’s Royal Naval Service) loading the Browning .303-inch machine guns of a Hawker Sea Hurricane Mk IB at RNAS (Royal Naval Air Station) Yeovilton, Somerset, September 1943. By 1944, 75,000 women were serving in the Royal Navy at bases in the UK and overseas, freeing up men for active service. Although a few served as boat crews on tugs and harbour launches, they were not allowed to go to sea. Instead, they performed a range of shore-based roles, many of them of a technical nature such as ship repair, aircraft maintenance and radio communications.

An ATS ‘spotter’ at a 3.7-inch anti-aircraft gun site, December 1942. On her shoulder can be seen the badge of the 1st Anti-Aircraft Division, which controlled the searchlight and gun batteries defending London. The ATS was established in September 1938, to allow women volunteers to serve in non-combatant roles in the Territorial Army (and initially, the RAF too). As the war progressed conscription was introduced, and duties expanded to include more than 80 trades, some highly specialised and technical. The ATS reached a peak strength of 210,308 officers and other ranks in June 1943.