Author Cate Quinn writes a piece for Female First upon the release of her new book Blood Sisters.

Author, Cate Quinn, explains why pulling pints in her underwear nearly drove her to murder. And how Jane Harper inspired her to finally commit her experiences to paper. 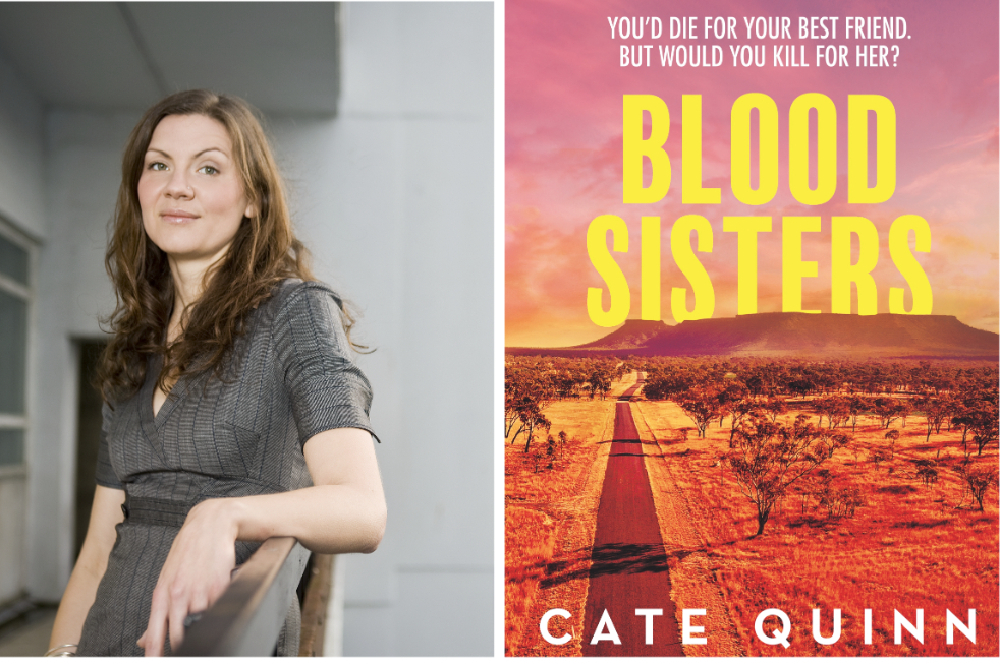 As a travel journalist in my twenties, I made a lengthy trip around Australia, working as I went. I waitressed in Sydney, stuffed envelopes in Brisbane, picked fruit in Bundaberg and packed vegetables in Alice Springs. I wrote for The Guardian and The Independent, and for a slew of magazines.

As I ventured deeper, a theme began to emerge. The deeper and more remote I got, the more unsavoury and exploitative the positions. Then I stumbled across the “skimpy” trade.

A “skimpy” is a barmaid who works in her underwear. It’s a classic feature of roughneck remote mining towns where armies of single male miners spend their limited downtime drunk as skunks, hunting for women to sexually harass. Barmaids in their undies are the perfect solution, since they can’t very easily walk away or throw a drink in the face of a licentious man. Not least because accommodation in these far-flung watering holes, usually comes with the job.

Skimpies culture bleeds out into the Outback pub eco-system, and ‘regular’ barmaids are often expected to bare flesh too. My personal experience was as a kind of skimpy-lite pulling pints in a regulation ‘uniform’ of daisy dukes and a tight-tee. Just like the two barmaids in my book, Blood Sisters, I endured all the ill-effects of a pub-culture where the objectification of women was as entrenched as the mile-deep mines.

That feeling, of being trapped behind the bar, ill-treated and harassed, is hard to put into words. But I can say it’s about as close as I’ve ever felt to killing someone. The sheer helplessness of being perpetually faced with men who think it their God-given right to have you deliver more than a pint … It really could drive a girl to murder.

I thought there was a story in it. But I parked the idea, because I wasn’t sure I could marry my experiences as a travel journalist with fiction. Instead, I wrote a historical fiction series called The Thief Taker, which I loved. I had a family, which I loved more, but my mind kept coming back to a single idea: two pretty barmaids, a pub full of mine-workers, and something that makes someone snap.

Then along came Jane Harper. Her first spectacular book (The Dry, in case you’ve been living under a rock) was the whole package. A gripping thriller, a travelogue, an adventure into a strange and thrilling new world. Even better, Jane was a journalist, just like me. But unlike me, she’d been brave enough to deploy her journalist smarts, and get out interviewing people, just as though she were penning a news piece. I was in awe. Blown away by her talent. And a tiny part of me thought … maybe I could do that too.

All that stood in my way, was the small matter of aspiring to be a tenth of the writer that Jane Harper is. I devoured her next books and each time read the acknowledgments, realising how much her fiction was a good amount journalism as well as creative genius. It was Jane Harper that finally made me brave enough to try what I’d always wanted to write. The result was Blood Sisters – a crime thriller about two barmaids (surprise surprise!) and a mining pub-lock-in where a shady bar-fly is found brutally murdered as the sun comes up.

To say I enjoyed writing it is an understatement. It was fun, cathartic, and a wild adventure. By the end, I even ended up with sympathy for the miners. And I owe it all to Jane.

Cate Quinn’s book, Blood Sisters is a crime-thriller set in a remote Outback bar, where two Californian backpackers are charged with the brutal killing of a local miner.