Ellie Midwood, author of The Wife Who Risked Everything shares seven things about her

I always wanted to be a writer, but almost became a surgeon instead. I grew up surrounded by books—my mom was a librarian and the magical labyrinth of her workplace was my favorite place to be as a child—and began reading when I was three or four. I began inventing my own stories shortly after and writing them down back in elementary school and haven’t stopped since. However, in my high school, I seriously contemplated following my grandmother in her professional footsteps and becoming a surgeon after hearing too many times that writing is not a reliable profession. A long tug-of-war between my dreamy side and rational side followed; the dreamy side won. My granny still jokes that this decision might have saved some poor soul’s life. 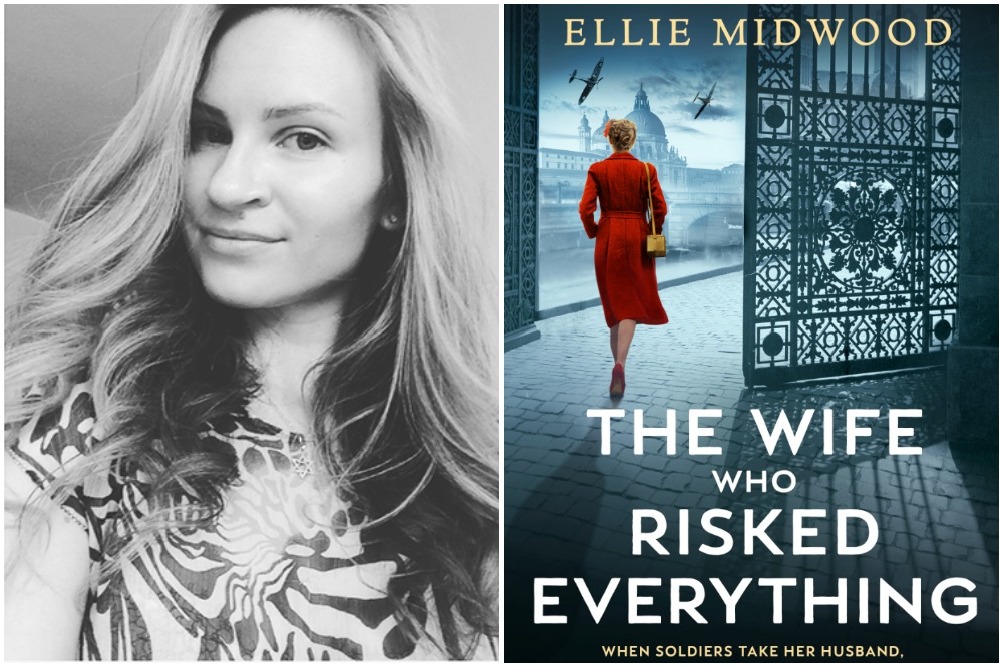 Ellie Midwood, The Wife Who Risked Everything

English is not my first language. I was born in what used to be the USSR (seriously, I have an actual stamp with the whole hammer and sickle thing in my birth certificate—wild, right?) and emigrated to New York shortly after my graduation. So, yep, I speak and write in the language that is not my native; please, send flowers and chocolates to my irreplaceable editor Christina who has to sort through all this mess in my manuscripts.

I’m introverted to the point of being antisocial. I do anything possible and impossible to avoid human contact in most forms. I order groceries online (just thinking of going inside a supermarket instills existential dread in me); I take the stairs if I see that someone is waiting for an elevator on my floor; I only text and never call; I email instead of using Zoom and mostly use social media to stalk my favorite doggie accounts. Fun fact: my fiancé is an extravert. How did we manage to peacefully co-exist together for ten years now, is a mystery. All two of my friends say so.

I didn’t choose to write historical fiction, historical fiction chose me. This is my go-to explanation when someone asks why I chose this particular genre. WWII and the Holocaust is so deep in my blood, I didn’t really have a choice. My maternal grandfather had probably the biggest influence on me, having fought in the war and surviving to tell about it. And tell he did: I basically grew up on his war stories, which I much preferred to traditional children’s fairytales. My grandmother also survived through the German invasion (she was twelve when the war ended) and had her share of stories to tell, starting with German planes throwing propaganda leaflets over her school and ending with Soviet troops being stationed in her house. We still don’t know what happened to two of our family members who were lost to the camps—whether they died on the transport or got killed inside—but I promised myself to keep their memory alive by telling the incredible stories of their fellow sufferers and survivors. My biggest hope is that I did them justice.

I’m obsessed with dogs. To the point of ridiculousness. Not only I pamper my own two pooches more that some people do their human babies, I melt into an emotional puddle each time I encounter a four-legged “bestest boi/girl” in the street. I made it my mission to pet all the doggies I meet. I watch dog videos until Instagram runs out of them. The only way to lure me to a party is to promise me that there will be doggos there. I know all of my neighbors’ dogs’ names, but not my neighbors’ names. I physically hurt when a doggie suffers in a movie (even if the movie ends well). I guess that’s why one of the characters in my newest novel, “The Wife Who Risked Everything,” is a dog—a very good boy named Goose! If you want to see what Goosie has to go through together with his mom Margot and his dad Jochen, you can get their story from your favorite retailer and I hope you’ll enjoy their incredible journey!

Ellie Midwood is a USA Today bestselling and award-winning historical fiction author. She owes her interest in the history of the Second World War to her grandfather, Junior Sergeant in the 2nd Guards Tank Army of the First Belorussian Front, who began telling her about his experiences on the frontline when she was a young girl. Growing up, her interest in history only deepened and transformed from reading about the war to writing about it. After obtaining her BA in Linguistics, Ellie decided to make writing her full-time career and began working on her first full-length historical novel, "The Girl from Berlin." Ellie is continuously enriching her library with new research material and feeds her passion for WWII and Holocaust history by collecting rare memorabilia and documents.

In her free time, Ellie is a health-obsessed yoga enthusiast, neat freak, adventurer, Nazi Germany history expert, polyglot, philosopher, a proud Jew, and a doggie mama. Ellie lives in New York with her fiancé and their Chihuahua named Shark Bait