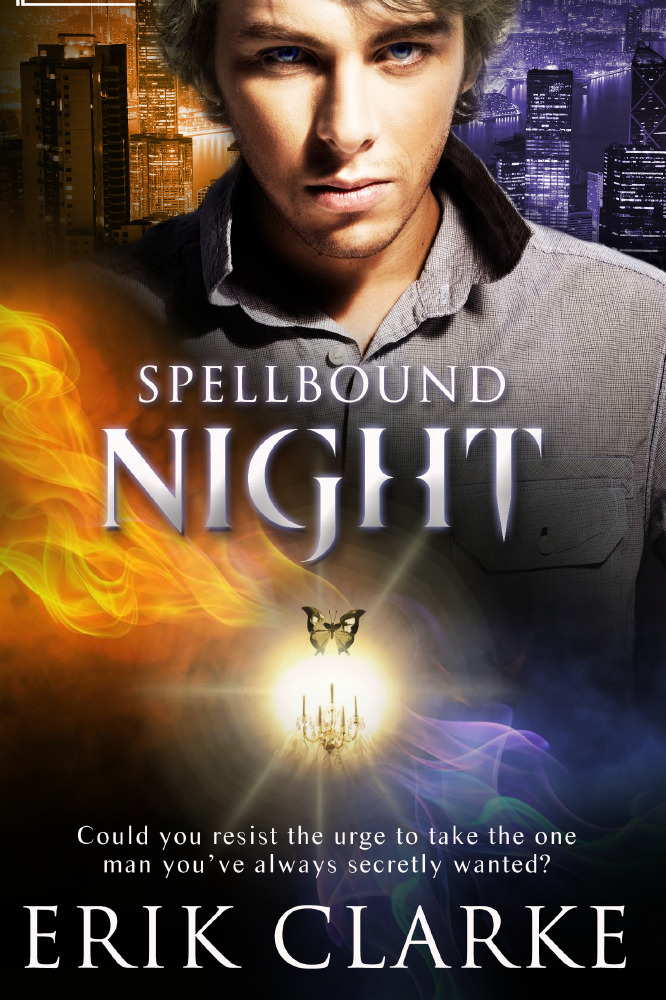 Night is the first book I've had published and the first book in my paranormal erotic romance series, Spellbound. The story centres around Cole Turner, who is a Seer that can See everyone's future except his own. Because of that, he feels like he has no control in his life, and his Dreamwalker friend Luke tries to help him in that regard by giving him a drug called Night. The drug, which gives Cole the allure of an Incubus, immediately, draws in suitors like moths to a flame, to the point where it becomes almost impossible to go outside. To complicate things even more, the Incubus that it was harvested from intends on hunting Cole down, and Luke, the Seer’s go-to in times of need, now wants him like everyone else, a point made even worse by the secret desires Cole has for the friend he had always assumed was straight. In order to get his life back to some semblance of normal, Cole has to find a way to get the Night out of his system while dodging the homicidal Incubus and figuring out how to keep his relationship with Luke intact.

This is book one in the Spellbound series, so can you give us some insight into the rest?

There are going to be six stories in the series, and each one focuses on a new pairing. There are characters that crossover from each book. The next two books, Monster, which comes out in April, and Wonder are located in the same place and focus around the Were-Shifter Max York and the Vampire Adam Harkin, who are first introduced in Night. It was a lot of fun getting to flesh them out as main characters and give them some back-story and depth. The last three books in the series will take something of a darker turn, but they will be just as focused on steamy romance as the rest of the books.

Please tell us about the character of Cole Turner?

Cole is in a pretty unique situation. As a Seer, he has the power to make big changes in the timeline and have serious effects on other people's lives, but since he can't See his own future, he's as clueless in that regard as the rest of us. Having to reconcile that is really hard for him to deal with, and it's what drives him to actually take the Night in the first place. Since he can't see his own future, he also can't see events that would affect his life too directly, so he was powerless to See the deaths of both of his parents before they happened. He has to live with a lot of guilt, and that's pushed him to fill every moment of every day so that he doesn't have to dwell on his circumstances. It was really interesting to write a character like that, who's distinctly aware of how close he is to a breakdown at any given time, especially once the craziness of the plot really gets into full swing.

At what point did you decide to make your margin scribbles into a book?

I've been trying to write a book for years. My first big schemes for a full blown novel happened back in fifth grade and I've been working at writing pretty much non-stop since then, just the plots have changed. The biggest hurdle I faced in actually getting one done was the need to stop talking about writing a book or planning it down to every detail and actually just starting to write it. Once I settled on a plot as a general series of events rather than explicitly outlined scenes, it was a lot easier to get into the swing of things and let the writing come naturally. That was a big part of how I actually managed to finish a manuscript.

Why do you have a love/ hate relationship with Arizona?

There is a lot to love about Arizona... the scenery is gorgeous, the weather's consistent; you never have to worry about a tornado, or a hurricane, or earthquakes. But the toss up to that is definitely the heat.

How much have your family and friends been integral to your writing?

They're really the main reason why I was able to actually get this book done. For as long as I've been trying to write, my friends and family have been cheering me on and making sure that I stick with it even when I wasn't sure that I would manage to finish, especially now that I'm working on a series so there is a time constraint.

How difficult is it to juggle writing with your other commitments?

I'm a full time student going for two majors, so school is a big time commitment, and much as I love writing, my studies are always my first priority. Then there's also my job, which takes a good chunk out of my schedule, and occasionally I do try to spend time with my friends, too. I've got it down to a pretty good system now, but when I first agreed to the series and suddenly had a time limit on something I'd always just done in my spare time, it was a bit of a scramble that took some time to get used to. It's still a constant effort to make sure everything gets the time it needs, but I like to keep busy.

What is next for you with Totally Bound?

There are six books planned in the Spellbound series. Book two, Monster, will be up for sale starting April 18th, and Wonder, the third instalment, should be out during the summer, with the last three books to follow afterwards. As for after that, I don't have any solid plans, but I've got enough plots running around in my head to keep me busy for a long time. I'm hoping to work on something in the contemporary or sci-fi genres in the future, branching out of the paranormal (at least for a while).

You can purchase Night from Totally Bound today!