How a local churchyard inspired my new book by Leila White

Author Leila White writes a piece for Female First upon the release of her new book Churchyard Epiphany.

As we head out into our gardens to enjoy the spring weather, author Leila White shares her love of herbalism and reveals how her new book charts the potent plants and flowers she found in her local churchyard. 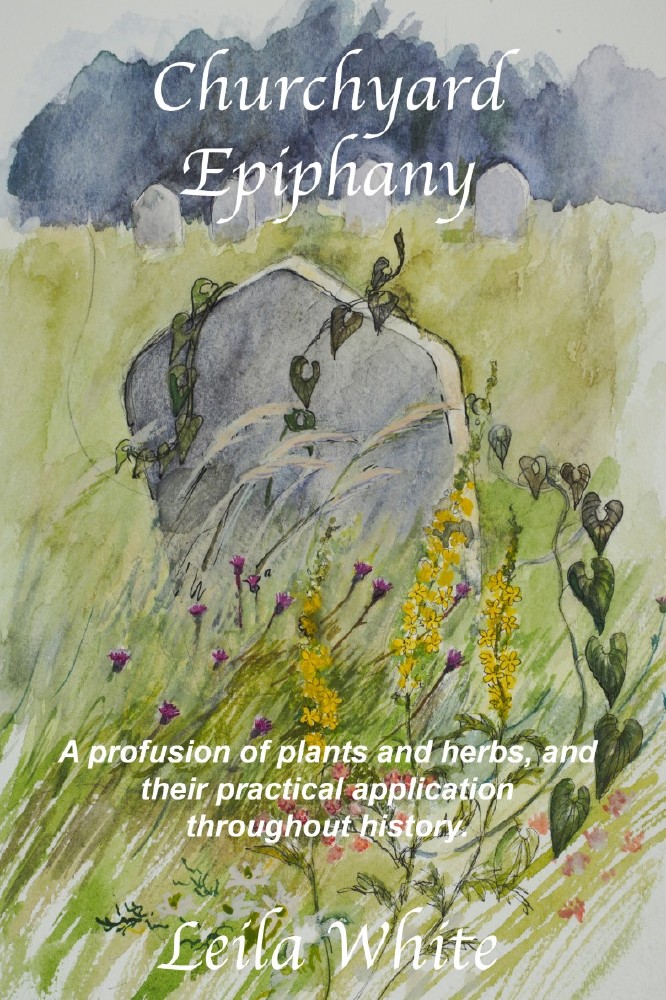 How did I get into herbalism? I have early memories of my aunts asking if I liked butter by holding a buttercup flower under my chin. If my skin glowed golden, then that was a sure sign of liking butter. Which I didn’t, as it happens.

When I was young there were wild flowers in abundance. The fields and wayside were full of the colourful plants, school children would pick bunches of red and white clover, buttercups, forget-me-nots and daisies. The classroom windowsill had a row of jam jars with the floral offerings brought to the teacher.

During a visit to my Grandmother in the Shetland Isles, my aunt helped me identify the local wild flowers, and showed me how to press them using blotting paper and dried out under the rugs. Later my mother stitched them into an old photograph album as they were very brittle. For this I won the only prize I was to get in school, the Nature prize, which was a copy of the Ladybird British Wild Flowers. It is a beautifully illustrated book and still a little treasure.

When I became a Girl Guide the badge I really wanted to earn was the Naturalist, regarded as too challenging for the younger girls. I stuck at it and achieved it.

Within the family it was often mentioned that my grandfather’s mother and grandmother practiced herbalism. His mother was especially highly regarded as a midwife. Of course, as a child, that information goes in one ear and out the other, but I was always greatly interested in plants and did find many when out and about, especially plants that had a distinctive smell, Herb Robert and Ground Ivy two of my early favourites.

As I grew older I learned more about how plants and flowers had been used in the past for their medicinal properties. We had a curious family tradition ourselves which involved us saving the stones from plums, drying them, and then cracking open the kernels to share around the family. They were bitter to taste, and only in recent years have I discovered that apricot kernels were promoted as a means of treating cancer, known as laetrile.

In 1986, I met another mum at the school gates who was a keen herbalist. Her whole process seemed magical and inspired me. My mother in law gave me a fascinating book on a new kind of therapy, aromatherapy called Aromatherapy for Women by Maggie Tisserand around the same time. I was hooked. It detailed the oils and how to use them. Armed with this book, I was able to source oils from a company in Edinburgh, which I used along with vegetable oil and massage instructions and I got to work on my own family. After a lifetime as a teacher, I finally pursued my dreams of alternative therapy in my fifties in the late 1990s, focusing on Reflexology, Bach Flower Remedies, Kinesiology and Reiki and Healing. Another book, Anne McIntyre’s The Apothecary’s Garden has been another inspiration; it lays out the herbs and plants in a grid system alongside the various illnesses and conditions they can help with. I sectioned off part of my own garden to create a herb patch; in the center a circle with a tree stump to sit on surrounded by chamomile, a gazebo with lengths of hazel to go over it. Around that a narrow border for smaller herbs, and a larger outer border for the more substantial plants. I began experimenting in the making of tinctures and ointments.

I gained qualifications in massage, aromatherapy, Bach Flower Remedies, and Bioforce Phytotherapy. In 2001 I was asked to give aromatherapy massages to a lovely woman suffering from cancer. At that point, I decided to find out more about how to support someone with cancer and decided to take courses at the Bristol Cancer Help Centre. I began a Master’s degree on Alternative and Complementary Treatments in the care of Cancer, achieving the first module before developing an auto immune illness which lasted for many years. I did very little during that time, a cause of great frustration to myself and the family. Eventually I was able to resume my training with Melanie Cardwell’s Herbal Academy course. I enjoyed all the research and it was at this point I found myself in a little churchyard near my home full of beautiful and interesting plants.

An old country churchyard can have such appeal. Most have such a welcoming feel; any place that has been used spiritually can have an aura about it. It is a place to contemplate peacefully, away from the noise of traffic and other distractions in our lives. Welcoming, natural spaces. I have noted that during lockdown these places have been sought out by so many of us as little havens of much-needed beauty and peace.

I found myself there during a period when the graveyard was not so tidy. The old graves were rather wonderfully over grown, and just to my liking. It was there that I first noticed in amongst the confusion and profusion of pink, purple, white, blue and yellow plants, were many that I had been studying as part of Melanie’s course. I was keen to see what each visit to the churchyard would bring. Once I had done with the flowers, the hedgerows and the trees, I started to notice the lichens, mosses and mushrooms. The more I looked, the more I found. Even growing in the gravel, I spotted the tiny flowering plant Veronica Verna.

I felt compared to share all that I had learned and decided to write a book about these treasures that the natural world offers us, even in what might seem like the most unlikely of places. I’ve written about the plants I’ve found just in this one public space, and their various uses in medicine and other therapies, both historically and today. Aromatherapy, Homeopathy and Bach Flower Remedies are covered as well as the work of horticulturalists and herbalists such as William Withering, Thomas Bartram, John Wesley, Maud Grieve. As we learn, post-Covid, to engage more and more with the natural world around us, the more we can reap the benefits it has to offer us.

There are many people who now value the great outdoors, ours gardens, plants and nature, and might be looking for just this sort of book. I hope my love affair with plants is something that will bring joy to others.

Churchyard Epiphany by Leila White is published by Clink Street on May 4th, RRP £11.99 paperback, £3.99 ebook and is available online and to order from all good bookstores.

RELATED: How working in bookshops has inspired me to write my own novels by B P Walter

I worked in bookshops from the age of 16 until I was 23, and for most of those years I never really thought about ever becoming a novelist or even trying to write anything. I went through a period of thinking I wanted to write books when I was about 13, but I soon lost that as I got into my late-teens and I steadily became much more interested in reading books and watching films rather than writing my own stories. However, working in bookshops did prove important in many ways retrospectively when it came back round to the idea of writing novels in three clear ways.