10 Reasons Why You Should Believe In The Spirit World

Susan Starkey writes a piece for us upon the release of her new book Life After Death Beyond Doubt.

by Susan Starkey author of Life After Death Beyond Doubt 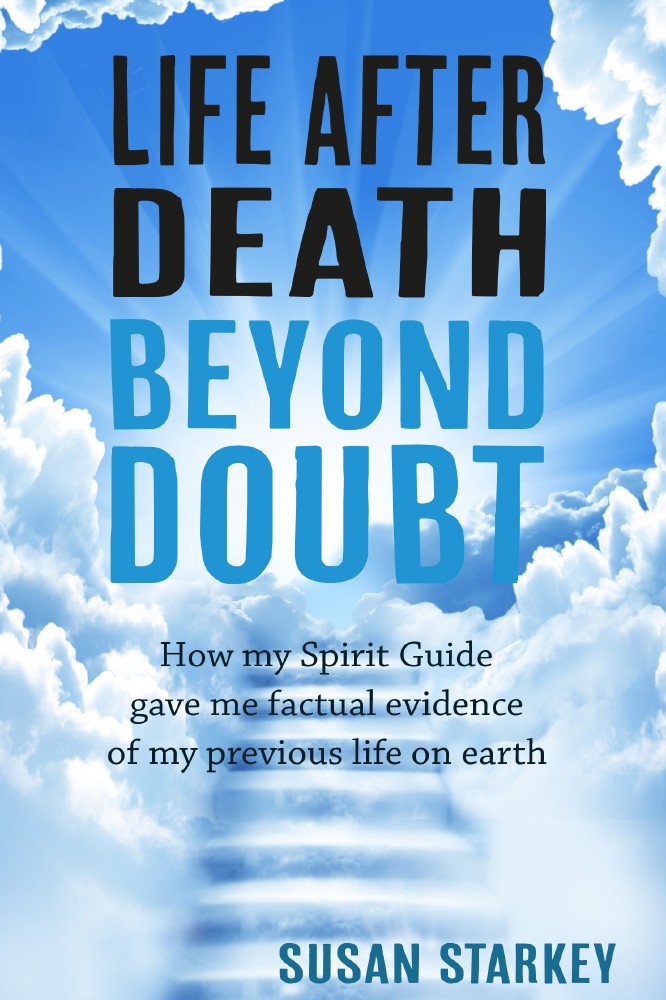 Life After Death Beyond Doubt

What happens to us when we die? Many people have their own individual theories; different faiths have different beliefs. The rest of us can merely shrug and resign ourselves to the fact that we can never know the unknowable.

Just a few years ago I would have felt the same way. But following a move to Spain, a sequence of astonishing events changed my life dramatically, turning my scepticism on his head, especially regarding the question of what happens to us when we die. I am now convinced that there is life after death and within my book, I reveal my personal experiences and share the verifiable evidence of my discoveries.

I believe that spirit guides are those on the other side, on a different plane to ours, who lead their own lives in spirit but who come forward to make contact with us to help us and in turn for us to help others. So many people are lost when they lose loved ones and I hope that I can give them comfort in knowing that their loved ones are being cared for in the next world.

Here are 10 reasons why you should believe in the Spirit World.

My spirit guide, Elephally, communicated with me through automatic writing. I found that I had an ability to put a pencil on paper and my hand would move of its own volition, writing in a completely different style to my own. In this way I received messages from the spirit world.

I witnessed a nasty car accident on my way to a meeting. I waited with the injured man who was trapped under a car until an ambulance arrived. Although, I was serious delayed, I arrived at my meeting on time. Had the spirits made time stand still, so that I wouldn´t miss anything important, I asked myself.

My spirit guide, through my automatic writing, told me about himself and the life he led in Libya, describing the place he came from which was in the South of Libya in the desert, near water in a place called Awbari. I felt goose bumps on my skin when I found Awbari on a map of southern Libya and also photographs of the Awbari lakes. I had never heard of this place and being able to verify this information changed me from a sceptic to a true believer in the spirit world.

Elephally told me that I had lived in Spain in a previous life and that I must go to the mountains; that high in the mountains I would find a small hut with views all around it. It would be in the east and that no-one lived there now. That this would be where I would find myself. I had a vision of this hut and I also discovered, in a local bar, a photograph of an old building closely matching my vision. After several abortive attempts at finding the ruin, I came upon the house where I had lived my previous life, as described by Elephally.

I discovered that the ruin was owned by my nearest neighbour, whose grandfather Antonio had lived there. The name of my first son in my previous life, given to me by Elephally, was Antonio. This led me to believe that my neighbour was my great, great granddaughter and that her children were my long lost family. Again all the details given to me from the spirit world rang true.

Elephally told me that I should return to the ruin as there was a dog and young boy waiting for me. When I did return the three of us clung together and walked towards the sun, a vast bright light which my son, my dog and I disappeared into. This released me from my previous life, enabling me to carry on. Elephally had told me that I would now be able to help other lost souls find their way home.

My experience of seeing lost souls being guided to the light. Early one morning walking along a remote beach in Thailand I came across a graveyard with pegs sticking out of the ground and parts of boats scattered across the land. I knew instinctively that this was an area affected by the Tsunami of 2004. I saw a young woman and child, who were lost souls and I was able to guide them to the light and watch them float towards it into the next world. With the spirits guidance I also prayed for other lost souls and I felt a great rush sweeping past me, as these lost souls too headed for the light.

Continued proof from my spirit guide that there is life after death. Elephally provided me with links between some very famous people, including past politicians and musicians and of John Bright, a famous Quaker, a British Radical and Liberal Statesman: details which I could prove from the internet and which I had no previous knowledge.

The spirits have helped me to provide meaningful and helpful messages to strangers in need of comfort and reassurance that there is life after death, where their loved ones are being cared for with love and kindness.

About the author: After leaving the corporate rat race, Susan Starkey moved with her husband to the idyllic countryside of Andalucia Spain wheres she enjoys exploring the natural beauty of the area, sampling the regions delicacies and on occasion turning her hand to property renovation projects. A previous skeptic, Susan has since embraced Mediumship after a chance invitation to a spiritualist meeting strongly challenged all the beliefs she held and led her on a path of spiritual discovery. Life After Death Beyond Doubt by Susan Starkey (published by Clink Street Publishing 25th January 2018 in paperback and ebook) is available to purchase from online retailers including Amazon and to order from all good bookstores.