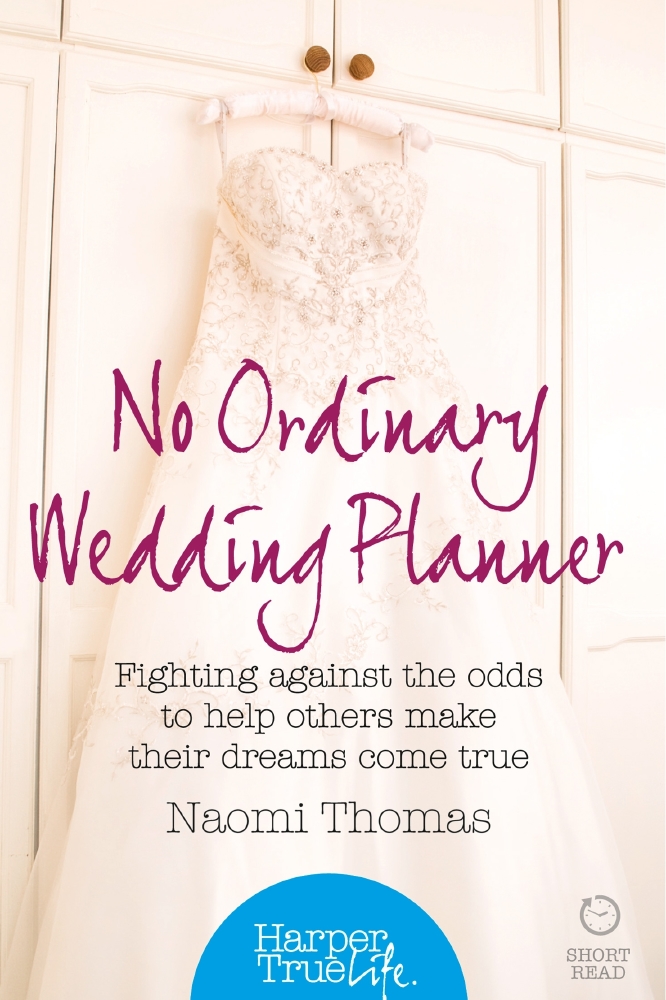 My new book No Ordinary Wedding Planner tells people about my life from first meeting my Husband to the present day. Although it is a period of just 5 years, my life has been a roller-coaster during that time. Within weeks of meeting my now husband we were engaged and within days diagnosed with cancer. I wanted to make sure cancer didn't rule my life in a negative way so  decided to turn it into a positive and help others going through a similar experience. Starting a charity was a natural progression for me but when I decided to start helping people to marry, I had no idea that there was such a great need for help.

Please tell us a bit about the Wedding Wishing Well Foundation.

The Wedding Wishing Well Foundation is a registered charity based in the West Country which organises and funds weddings for people with a terminal or life limiting illness. We help couples from all over the country so it isn't just local to where we are based. We do this with the help of financial donations, sponsorship and donations of services from wedding suppliers.

What went through your head when you first found out you had cancer?

When I was first told I had cancer I was pretty numb. I didn't cry I just sat in shock trying to take in all the information they were telling me. It wasn't until I left the hospital and rang my parents that I broke down in tears. No parents should ever have to hear the news that their child has cancer. After a night of struggling to sleep and nightmares I decided that I needed to fight. From then on I never looked back.

What were your wedding plans prior to finding this out?

Graham and I had been engaged just a couple of days when I was told I had breast cancer. We had planned to marry right away but with such a big hurdle in our way there was no way we would be getting married so quickly. We decided to wait until after my treatment, which we did, although that didn't go to plan either!

Why do people take getting married for granted?

I don't think it’s a case of taking it for granted, you just don't think illness will happen to you. We all get wrapped up in our lives and with work commitments and financial restraints it is too easy to put a wedding on the ‘one day’ list. As soon as you find out you’re ill or dying it often becomes the first thing you think of. Securing your love for your partner is like an overwhelming urge, I guess, to feel secure and loved but also, if you have children, to make sure that if you are going to die, your family knew you loved each other more than anything.

How did you go about setting up the charity and please tell us about the response you had.

When I decided to start the charity I literally had no idea where to begin. I contacted my local Voluntary service who were a huge help to me. They were able to advise me in depth on the different choices I had to make when beginning the process and the legalities of such a task. Once I had all that in place it was a case of building a database of suppliers that were of a good standard and who we knew we could rely upon when we needed them. The response we've had has been simply overwhelming. It is humbling to see just how many people are happy to give their time and expertise for free. We see so much bad in the newspapers these days it was refreshing to feel some good for once. Many of our supporters have been touched by illnesses such as cancer so they find it an easy decision to get involved. I had no idea when we started that the charity would become such a huge part of my life and would enable me to do things that I’d never dreamt of before. I've certainly ticked lots off my bucket list just by having cancer. Not many people can say that their lives were improved by such a disease coming into their lives.

What do you hope to achieve with this book?

I hope that the book will raise the profile yet again of the charity and the work that we do. I hope it gives more people the opportunity to hear about us to allow them to apply if they need us. I really hope that it raises the issue of breast cancer in young people and that maybe it makes someone get checked if they have found something they are not sure about with their breasts or any part of their body. I also hope that it will inspire those fighting cancer to find positives in the situation. Most of all though I hope that the book is something that my little boy can cherish forever so that he knew mummy's story in my own words and that he is proud of what I have achieved.