Author N E Miller writes a piece for Female First upon the release of his new book The Achilles Gene.

My debut novels follow the adventures of two Oxford University geneticists, when they set off to investigate the work of an American colleague about to be given the Noble Prize, which they suspect to be fraudulent. What they discover during a quest that takes them to four continents is much more than they could ever have imagined. 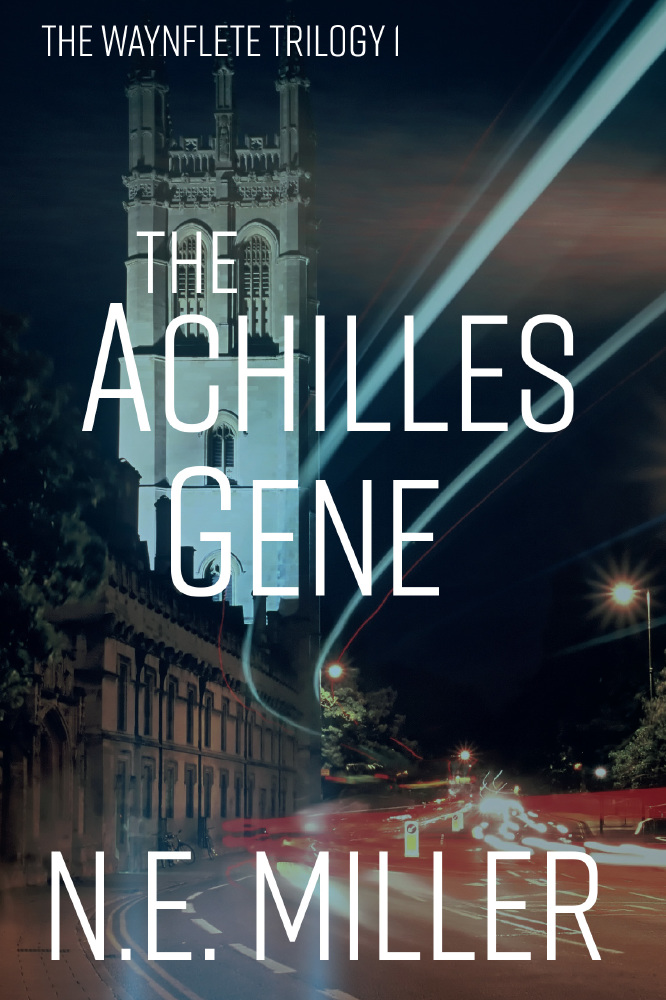 The urge to write a mystery thriller had been with me for several years before I put pen to paper. I was in my room in Magdalen College preparing for a lecture, when it occurred to me that science and the lives of scientists would be very good material, and the College, with its beautiful buildings and gardens, the perfect backdrop. As the College’s Waynflete Lecturer, I had been tasked with delivering a series of open talks on ‘good’ cholesterol, the lifelong focus of my research since discovering its protective effect against heart disease many years ago. The popularity of the lectures had convinced me that I have a gift for explaining science to the public in a way that is readily comprehended and entertaining. So, I picked up my pen there and then, and jotted down a few notes. From that moment on, writing fiction became as important a part of my life as lecturing and research.

My intention had been to write just one book, The Achilles Gene, but by the time I had finished, the central plot had spawned a number of subplots, two hidden from the reader, and it was rather longer than I wanted. So I went back to the drawing board to make two books out of it, The Achilles Gene, ending with the completion of the central plot I’d originally had in mind, and Deidamia’s Surprise with a new storyline, during which the hidden subplots surface to reveal that much in The Achilles Gene - events, people, and places - was not as it seemed. The plot of the third, A Pyrrhic Victory, revolves around an unanswered question that is left hanging at the closure of Deidamia’s Surprise. So, the three books are inseparably intertwined, and have to be read in sequence. The process took me about fifteen years, a lot of meticulous planning, and an immense amount of research. I cannot imagine how novelists used to manage without the boon of the Internet.

I think the trilogy will appeal to anyone who enjoys science-based mystery and adventure, a labyrinthine plot, a fast-moving narrative, and most of all, surprises, of which there are many. As will be detailed below, in spite of having been conceived some time ago, the plots are very relevant to today. There is a lot of travel to interesting places, some humour, and a touch of romance.

Which brings me to the principal characters. Giles Butterfield is an English virologist and geneticist who had moved to Oxford from Liverpool at a late stage in life expecting it to be academic heaven. But he had soon realised he was a square peg in round hole. A maverick, down to earth, energetic, and affable, he misses the north-west of the country, its people and habits, and longs for an adventure. When he stumbles upon an opportunity, he grasps it and never looks back. His laboratory assistant, Fiona Cameron, is much younger and hails from the Western Isles of Scotland. A lively woman with an optimistic positive outlook and a strong independent streak, her role in their adventures is vital. More often than not, it is her intellect, imagination, or perceptiveness that the solve their problems, find the answers, and provide the next leap forward in their enquiry. They are a natural team and their long hours and days together engender a closeness that has an inevitable outcome.

As I mentioned, readers will find the stories very relevant to today. One aspect of this is the current tension between the West and the Islamic world, for although almost all of the action in the books takes place in Europe, America, Africa, and Asia, the central plot of The Achilles Gene, and consequently all that follows, is rooted in the Middle East. During a youth spent with diplomatic parents, Giles acquired a knowledge of Arabic, which makes a crucial contribution to the story on more than one occasion. A champion of the great achievements of Islam in the sciences, medicine, mathematics, and literature over the centuries, he feels passionately that the West has exploited and consciously disremembered them. Another very current aspect is the central role played by genetics and the genetic code, the importance of which in our daily lives has been so evident of late. And nothing could be more current than the fact that the central plot of A Pyrrhic Victory - purely by chance, I should add - revolves around a mosquito-borne virus that threatens to cause a devastating pandemic. Computer technology is also very much to the fore, with spyware providing the key that unlocks the door on more than one occasion.

It was inevitable, of course, that my own experience of university life had a strong impact on my writing. It was important to me that the story should lift the veil on the hidden world of academic science to reveal it to be very different from the common perception. Medical researchers will be seen to be much more colourful and human than the familiar stereotype. Many readers will be shocked to witness how rivalries and competition for the accolades, prestige, and power that come from making a breakthrough can bring out the worst in some as well as the best. Having been at the wrong end of the former on more than one occasion in my career, I’m sure the seeds of Giles’ dual commitment to truth and justice, even when it stretches the boundaries of his own ethical limits, were planted by my own experiences. I can see other influences also. My time spent in universities in six countries gave me a love of travel and appreciation of what it can add to your education. The high that I have always felt after discovering something hitherto unknown about the natural world is shared by Giles. And my childhood in Liverpool, where I was a schoolmate of John Lennon, and where Giles felt most at home, also had an influence.

I have benefited from turning to fiction, and I recommend it to anyone who has it in them. I had often heard that novelists live in two worlds, the real one and the one they create. I now know how true that is, and how one’s invented characters seem almost alive. I’ve also experienced the loneliness that the business of writing thrusts upon you, and have a much greater appreciation of the challenges faced by creative artists of all types, whether novelists, painters, poets, sculptors, or composers. I now value their labour and their sacrifices more than ever. I’ve also learnt how creative work can be addictive, and understand why writers like Mikhail Bulgakov, Arthur Conan Doyle, Somerset Maugham, and Michael Crichton forewent their medical professions for the writing. It was not just for the money, or in search of fame. It was because they had to do it.

The Waynflete Trilogy by N E Miller, published by Clink Street, is out now and available to buy online and at all good bookstores.

RELATED: Kate White discusses her new novel Have You Seen Me?

All I knew for certain that day was that the nanny was dead, lying with her eyes wide open on the floor of her room in the house. She’d been violently sick to her stomach, and since she was only twenty-two, it wasn’t a stretch to assume that she probably died from consuming too much alcohol or overdosing on drugs. But I knew she’d actually been murdered, killed from eating poisoned chocolates that seemed to have been left for her boss....