How I spent my lockdown by author Will Maclean

Author Will Maclean writes a piece for Female First upon the release of his new book The Apparition Phase published by Penguin Random House.

The best thing that can be said about my lockdown was I did get to spend some time with the people I love. That’s not to say it was easy - we have a four year old (she was three then) and my wife has quite a full-on job that didn’t slow down. And so, looking after our daughter fell mostly to me, which was fine. FINE. It was FINE. Alright, it was fine most days. Although there was one particular day I remember us both shouting at each other, with me saying “WHY ARE YOU SO HORRIBLE TO ME?!” so it wasn’t at all like we were the Waltons. Mostly, though, we had a nice time, thank God, and we were very aware that this made us very lucky indeed. Some days were actually good fun. I remember we all went to a garden centre when that was allowed to happen again, and we all behaved as if it were Narnia – staring in open-mouthed wonder at trestle tables and planters, and other wondrous things that weren’t Things In Our House We’d Seen A Million Times. It was also two days after Dominic Cummings broke lockdown, so it was fascinating to hear that story unfold during our big day out. Fortunately, as you remember, the disgraced Cummings was sacked soon after and no-one’s heard from him since.

RELATED: What does it mean to dream about a ghost?

One thing that me and a lot of other writer friends with small children enjoyed was a feature in a well-known literary journal, about how various writers without small children planned to spend lockdown. They were all like “I’m going to re-read Ovid in the original Greek” and “I shall be revisiting all of Nabokov’s works”. I think my long term goals were to not go mad and to rid the world of all of its Bombay Sapphire, whilst my short term goals were to have a wash, and stop my daughter getting any more Play Doh in the bloody carpet. (Seriously. Four months on, it still looks like someone’s murdered a Smurf).

One thing I was unable to do during lockdown was write something new, so you’ll be glad to hear you’ve been spared my dystopian novel where Covid-30 turns people into werewolves or whatever (actually, that’s not bad). I did have a lot of editing to do on my novel The Apparition Phase, however, which took place mostly in the evenings and at weekends. I find editing tough, and it requires all your concentration to make the work better. Lockdown turned out to be a weirdly good time to do this, however, as I was missing having a project to work on, and it was great to have something challenging to do, to occupy my mind. I was really proud of the result, and that was a good feeling.

The best moment of lockdown, though, was when I found my daughter reading by herself, after two months of us reading basic words together. That was wonderful. I mean it was Peter and Jane Book 2, not The Brothers Karamazov or something, but it was still wonderful.

The Apparition Phase by Will Maclean (Heinemann, £14.99) is out now.

About The Apparition Phase

Tim and Abi have always been different from their peers. Precociously bright, they spend their evenings in their parents’ attic discussing the macabre and unexplained, zealously re-reading books on folklore, hauntings and the supernatural. In particular, they are obsessed with photographs of ghostly apparitions and the mix of terror and delight they provoke in their otherwise boring and safe childhoods.

But when Tim and Abi decide to fake a photo of a ghost to frighten an unpopular school friend, they set in motion a deadly and terrifying chain of events that neither of them could have predicted, and are forced to confront the possibility that what began as a callous prank might well have taken on a malevolent life of its own.

An unsettling literary ghost story set between a claustrophobic British suburban town and a menacing Suffolk manor, THE APPARITION PHASE is an unnerving novel, which, like all the best ghost stories, pushes us repeatedly over the line between rational explanation and inexplicable fear. It asks us to consider what might be lurking in the shadows, and questions what is real and what is simply a trick of the mind – and whether there’s really a difference between the two.

Will Maclean has been fascinated by ghost stories since he was a child, and has been writing them almost as long as he can remember. He’s written for television professionally since 2006, during which time he’s worked as scriptwriter for people as varied as Alexander Armstrong, Miranda Hart, Al Murray and Tracey Ullman. As well as comedy, he’s also written extensively for children’s television, where he’s been an integral part of writing teams that have picked up two BAFTAs and an International Emmy. Originally from the Wirral, Will now lives in London with his wife and young daughter. For

RELATED: Why I love haunted houses by Darcy Coates

If you bought someone else’s home, you bought a part of them, as well. The sweat from their fingers has seeped into the paint. Shed skin cells clog the floorboards and ducts. You can scrub, and you can remodel, but you’ll never be truly free from their legacy unless you raze the house to the ground... to read more click HERE 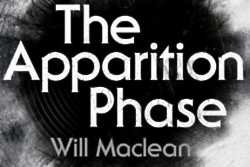 Female First reviews... The Apparition Phase by Will Maclean