Ashton Kutcher has confessed he's got webbed feet. The handsome actor, who is romancing Hollywood beauty Demi Moore, says he didn't there was anything abnormal about having two of his toes connected and proceeded to show the audience on America's 'The Jay Leno Show'. He said: "I have two toes that are connected, webbed. This made headline news? Can you see it? They are just a little connected. It is good to tell everyone. I heard this one little kid who had webbed toes and he thought he was abnormal but then he saw that I have them too and it confirmed that he is abnormal. I thoughteveryone's toes were like that. You can actually cut it when you are born. People's toes are joined then grow apart, mine just didn't all the way." Meanwhile, Ashton recently revealed his chance to join the mile-high club was ruined by nosy passengers. The 'Punk'd' star claimed he once tried to make love to an ex-girlfriend while flying but was too embarrassed to go through with it because too many people were awake.

He said: 'It was weird trying to get two people into the lavatory. There were too many people hanging around the bathroom door. So there was no opportune moment. I really wished everyone could have gone to sleep." 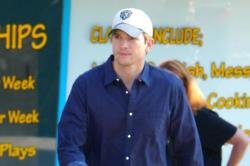 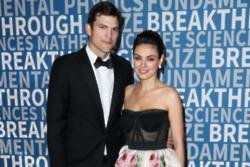