We spend a lot of time trying to hold Bono back from doing the maddest things possible. I just don't understand where he gets the energy.

The U2 frontman has started wearing thick black eye makeup under his coloured glasses because it makes him look like Elvis.

He said: "I thought I looked very sexy in eye make-up. It's a new character I'm trying out. I was calling him Elvis's dead brother, Jesse - which maybe is in poor taste. It's still in development! I started just messing with it a few weeks ago."

The 48-year-old singer .has a knack for stealing the limelight from the band, but that doesn't mean they listen to what he says.

Drummer Larry Mullen Jr. said: "People think we've all got beepers on, and it's like, 'Bono's had a thought! Oh, f**k! Get out your beeper!' "

He claims the other members of U2 spend a lot of time talking Bono out of his hare-brained schemes.

Larry said: "I think if Bono had his way, we'd probably be recording and playing for Africa, that's how he thinks. Just take everything and give it all. It doesn't work like that.

"We spend a lot of time trying to hold Bono back from doing the maddest things possible. I just don't understand where he gets the energy." 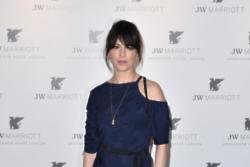 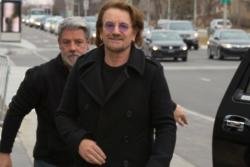 Bono says future of live music will be 'very different' 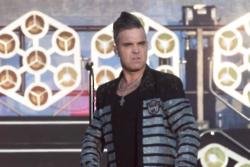 Robbie Williams' a cappella concert for Bono and George Michael