Brad Pitt to star in film version of 'Dallas'

Brad Pitt are set to star in a film version of 'Dallas'. The Hollywood star is hotly tipped for roles in the big screen adaptation of the hit '80s US soap opera - which ran from 1978 to 1987. According to reports, Jones is expected to land the role of glamorous Pam Ewing, originally played by the stunning Victoria Principal, in the movie. Pitt, whose estranged wife Jennifer Aniston filed for divorce at the weekend, is rumoured to be wanted for the role of Pam's husband Bobby Ewing. The handsome actor, who has previously starred with the Welsh actress in 'Ocean's Twelve', actually appeared in three episodes of the series in 1987 playing Randy, the boyfriend of the daughter of Jenna Wade, played by Priscilla Presley. Screenwriter Robert Harling admits he is thrilled the two stars are being considered for roles and is excited at the challenge of making the classic show into a film. He said: "We want to make a big all-star, flashy, go-for-it version of the TV series. It is reinventing the Ewing family as if they exist in 2006."

Other big-name stars lined for roles in the movie include veteran actor Burt Reynolds, who is wanted to play oil magnate J.R Ewing and Melanie Griffith who could play J.R's alcoholic wife Sue Ellen. 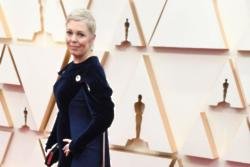