Courteney Cox admits she can ''get down'' on the way she looks and worries she isn't a ''hot young thing'' anymore.

worries about getting older and not being a "hot young thing".

The 46-year-old actress - who recently announced a trial separation from her husband David Arquette after 11 years together - has days when she gets "down" on herself about her appearance.

It's nice to feel sexy, even if it's only a matter of perception.

She said: "Sometimes it's a battle to accept you're no longer the hot young thing. To realise you don't attract people in the same way, it can be a bit sad.

"It's nice to feel sexy, even if it's only a matter of perception. There are days when I get out of bed and look in the mirror and think I look awful. I get down on myself. But other days I get up and I feel happy."

Courteney has also played down suggestions she and David will definitely divorce, insisting they both need some time to assess their relationship.

But she is adamant they are both totally committed to raising their six-year-old daughter Coco.

She added in an interview with OK! magazine: "We are trying to get some perspective, we have to take time to work things out for ourselves. I want to be as calm and together as I can be.

"We want to be close and harmonious for Coco. She needs to know we still love her and we still love each other, but right now we can't all be together the way we were before. We've still been having dinner together and making this as easy for her as we can."

Despite worrying about getting older, Courtney has been given a confidence boost by her role in TV series 'Cougar Town' - in which she plays divorcee Jules Cobb who dates younger men.

She said: "The producers have been great putting me in relationships with very handsome younger men. It's a nice boost to the ego."

Tagged in The Producers Courteney Cox 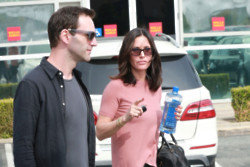