Jennifer Lopez's husband reportedly cut a kissing scene from her perfume advert - because he was jealous.According to In Touch Weekly magazine, Marc Anthony edited the commercial for his wife's new fragrance, Live, and removed a scene where she smooches someone else.The Latin beauty had been filmed dancing with a sexy male model before sharing a passionate kiss with him.But the steamy embrace was deleted before the ad aired.An insider told the magazine: "Marc's the jealous type."Even though he wasn't the director of the project, he suggested to Jennifer that the kiss was a distraction, and she agreed."Meanwhile, the pop diva has topped the poll for the worst hair cut of 2005.

The sexy brunette's hair style at the Billboard Latin Music Awards was voted the Biggest Hair Trauma of 2005.

Kelly Osbourne and Helena Bonham- Carter were second and third place respectively in the poll. 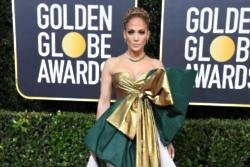