'The O.C.' babe Mischa Barton has made a New Year's resolution to start piling on the pounds.The super-skinny star also wants to stop smoking, which she knows will help her add some curves to her super slender figure.A source said: "Mischa wants to give up cigarettes because of the health issues, but also because she knows it will improve her figure.""She's convinced she can stop smoking and get a little curvier, too, if she puts her mind to it."Meanwhile, Mischa is reportedly on the verge of splitting from boyfriend Cisco Adler because of his possessive behaviour.The couple had a blazing row on New Year's Eve after Whitestarr rocker Cisco became jealous of Mischa spending too much time with her male friends.A source said: "Cisco was very angry that Mischa wanted to hang out with some of her other friends, and not exclusively with him.

"There was a lot of slamming doors, stomping around and swearing at their bungalow at the hotel." 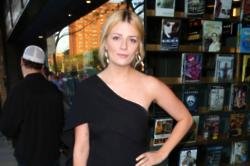