NAOMI WATTS WARY OF ACTION MOVIES Australian actress NAOMI WATTS has no intention of making another action movie, because she is still nursing a string of injuries sustained on the set of KING KONG. The 21 GRAMS beauty thought filming blue screen scenes with PETER JACKSON's computer generated ape would not be too physically demanding, but she was left in pain daily when the New Zealander employed actors to recreate the discomfort of being King Kong's captive. She says, "I had no idea what I was in for. It was intense.

"I'm sporty and athletic, but I was getting beat up a lot because they had men in lycra suits posing as a thumb or a finger or a piece of a dinosaur and they were always pushing and pulling and poking things at me. "I was getting injured almost every week. I can tell you now, I won't be running out to do an action movie any time soon. It nearly killed me!"Meanwhile

WATTS RECALLS THE MOMENT SHE KNEW SHE HAD TO ACT

Hollywood star NAOMI WATTS knew she wanted to become an actress from the moment she saw her mother star in a stage production as a little girl. The KING KONG beauty was only a toddler when she became awe-struck with excitement watching her mum MYFANWY in a theatrical play.

Watts, who lived in Britain before moving to Australia at the age of eight, says, "I saw my mum onstage when I was about four or five. She was playing ELIZA DOOLITTLE in MY FAIR LADY.

"I kept waving to her onstage and she wouldn't wave back. And my grandmother kept telling me to stop, until finally my mum winked at me.

"I felt all the magic and glory right there and then. I think that's when I got hooked." 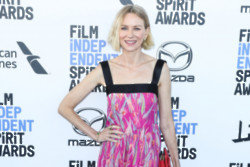 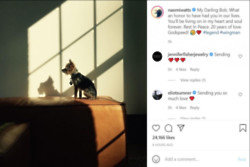 Naomi Watts' dog has died after 20 years in the family