Nelly Furtado has sparked rumours she has secretly married.The singer - whose engagement to Cuban sound engineer Demacio "Demo" Castellon was revealed in July - was seen wearing a gold wedding band on her ring finger, below her diamond engagement ring at Miami's Y100 Jingle Ball on Saturday (15.12.07).A source is quoted as saying: "Nelly was partying backstage with Natasha Bedingfield and Timbaland. She was so happy and there was no missing the gold band on her finger."Natasha took her hand and looked at it and then hugged her and whispered something in her ear. It looked like she was congratulating her."Nelly, 29, enjoyed letting down her newly-dyed blonde hair backstage after performing at the BankAtlantic Center to a packed house.The singer met Demo when he worked on her hit album 'Loose' in 2006. 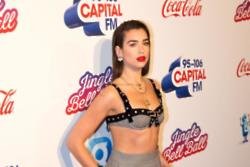 My husband has let himself go- any advice?