Hotel heiress PARIS HILTON is fighting off accusations she made racist comments at a New York party.Last week (ends01OCT04), American newspaper NEW PORK POST reported that in a recently surfaced 12-hour videotape, Hilton is shown speaking with two African-American men, who ask her if she would model their fashion line. The publication reported that Hilton, standing with pal BRANDON DAVIS, was polite to the men, but called them "dumb n*****s" after they left, according to British reporter CAROLE AYE MAUNG, who reviewing the alleged tape. Maung says, "Two... guys begin talking to her. She's being very, very sweet to them. (But) she definitely uses the N-word. It's so cruel, because they were so lovely, and she was being so lovely to them." But furious Hilton hits back, "Anyone who knows me knows that this is not me. I am deeply hurt by recent reports. I am not a person who discriminates against anyone - ever." Hilton's best pal NICOLE RICHIE adds, "She doesn't have a prejudiced bone in her body."

According to Maung, the tape also includes footage of Hilton "making love" with ex-boyfriend NICK CARTER in the back of a car and greeting one-time boyfriend JASON SHAW in the nude. 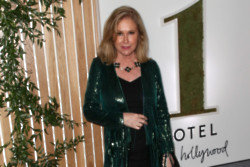