Rod Stewart and his fiancÃ©e Penny Lancaster have confirmed they are expecting their first baby in December.The 60-year-old rocker said he was "overjoyed and extremely proud" that the beautiful model, 31, was carrying his sixth child. The smitten pair, who have been dating for over five years, also announced they hope to marry after the baby is born, in Spring 2006.

Earlier this month, friends of the couple revealed Rod had proposed to Penny in March on a romantic break in Paris after discovering she was pregnant.The blonde model was reportedly seen soon after taking a baby scan photo from her handbag.And just days after news of their impending wedding, Rod quipped: "We've thought about having children, but I'll have to see how much I've saved up."While Penny admitted: "Rod and I are definitely planning kidsI love my work but I just want to be with him and have a baby".

A friend of the couple has since said: "They are so thrilled They love each other very much and a baby will make their life complete". 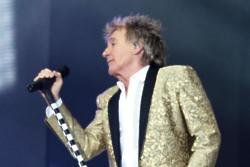 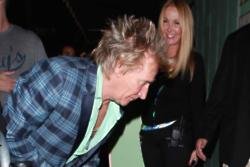 Rod Stewart hit out in 'retaliation'