Sienna Miller binged on fried food to gain weight for her new film.The actress was delighted when she was ordered to pile on the pounds for her role as Welsh poet Dylan Thomas' wife in the forthcoming 'The Edge of Love'.Sienna said: "I just stuffed my face for the months that we were in production. It wasn't hard for me. We were staying in this incredibly eccentric Welsh manor house. I had huge fried breakfasts, pasties for lunch and lots of toasted sandwiches."Despite being happy to bulk up for the role, the actress admits she suffers from the same insecurities as all women.She said: "My butt wobbles when I walk. Seriously, I have a lardy a**e. I have days when I wake up, look in the mirror and go, 'Yuk'."Sienna stars alongside Keira Knightley in the movie, and has nothing but admiration for her fellow Brit.She added to Britain's Elle magazine: "Keira is the most beautiful woman in the world. We totally bonded on the movie and it was so amazing to find a girlfriend in the business. In Hollywood they don't know what to make of us because we both drink, smoke and eat." 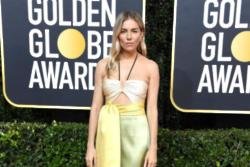 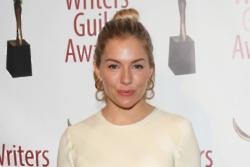