The rapper has also blamed the music industry on their split - after admitting he had been unfaithful to the mother of his three children.He confessed in an interview with MTV: "I fell back in love with my wife and kids.A lot of times you get cloudy.This music industry is a mother, man, and it'll take your vision and blur it."But I need my wife and my kids in my life.So if you hear about divorce, it'll be my wife divorcing me.It won't be me divorcing her".

Last December, the hip-hop star admitted how his extra-marital flings damaged his marriage to Shante.

He told America's Rolling Stone magazine: "I cheated on her That's the worst thing you could possibly do - lose somebody's the trust who really loves you".

Earlier this month, the rapper's womanising reputation went before him when Victoria Beckham ordered Snoop to stay away from her husband David at London's Live 8 concert.

The former Spice Girl revealed: "I told Snoop 'Look Mr Snoopy, you're not taking my husband out, I know all about your reputation'.

"As if I'd let David go out with him I don't think he liked me calling him Mr Snoopy, he didn't find it very funny". 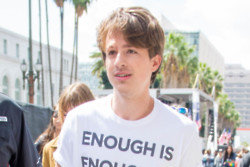