Tori Spelling has been spotted browsing in a baby boutique sparking rumours she could be pregnant.The newly-wed 'Beverly Hills, 90210' star was spotted shopping at popular boutique, 'Petit Tresors', in Los Angeles.A source said: "She was looking at things like cribs in a way that made it pretty clear she wasn't looking for things to buy someone else."A representative for the couple told MSNBC.com: "I have no idea. I thought you were going to ask me if she's really married or not - and I haven't even been able to find that out."The rumours come just days after Spelling tied the knot with actor Dean McDermott in a non-denominational ceremony on a private island in Fiji.At the time, she told America's People magazine: "We didn't want to wait another day to get married."McDermott added: "I've never had as much of a desire to get married and make a woman my wife as I've had with her. The feeling is overwhelming. We're soul mates.

"It was so magical. All the stars aligned. I have never been happier in my life."

The couple were both married when they met while they were filming TV move - 'Mind Over Murder' - in Ottawa, Canada, last summer. They got engaged in Toronto on Christmas Eve. 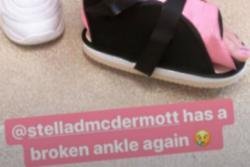 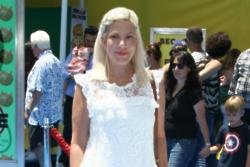 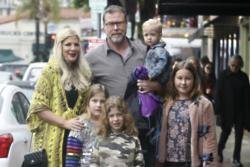