Brad Falchuck: Gwyneth Paltrow is 'the greatest human being ever'

Brad Falchuk has dubbed Gwyneth Paltrow the "greatest human being ever" in a sweet tribute for her birthday.

Brad Falchuk has dubbed Gwyneth Paltrow the "greatest human being ever" in a sweet tribute for her birthday. 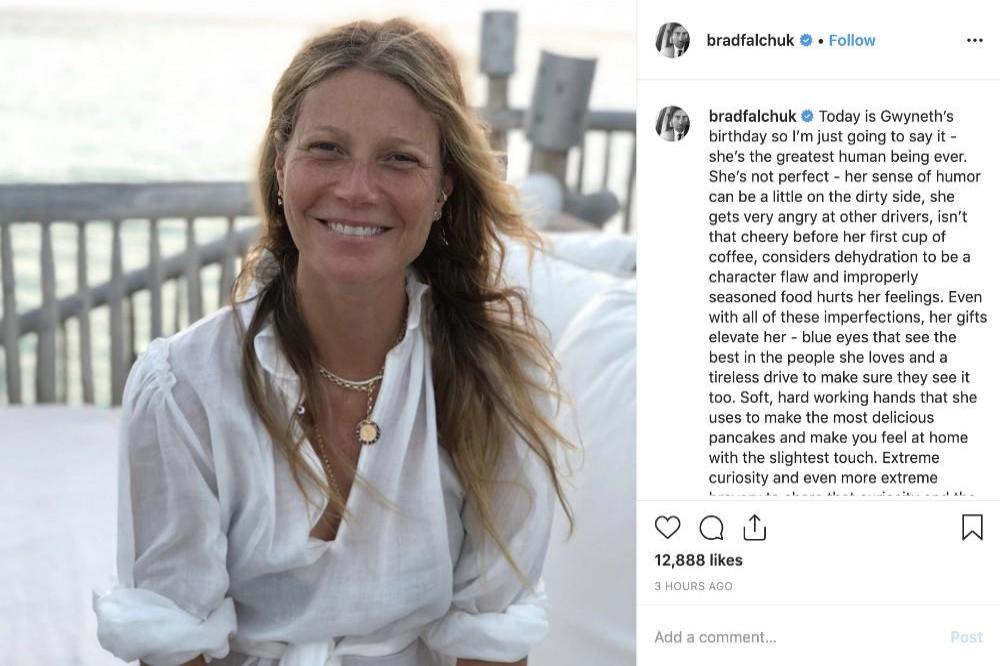 The Goop founder turned 47 on Friday (27.09.19), and to ring in the special occasion, her husband Brad took to Instagram to share a glowing tribute, which listed her "imperfections" but also highlighted how they made her "the best wife".

In the lengthy post, the 48-year-old writer wrote: "Today is Gwyneth's birthday so I'm just going to say it - she's the greatest human being ever. She's not perfect - her sense of humor can be a little on the dirty side, she gets very angry at other drivers, isn't that cheery before her first cup of coffee, considers dehydration to be a character flaw and improperly seasoned food hurts her feelings.

"Even with all of these imperfections, her gifts elevate her - blue eyes that see the best in the people she loves and a tireless drive to make sure they see it too. Soft, hard working hands that she uses to make the most delicious pancakes and make you feel at home with the slightest touch. Extreme curiosity and even more extreme bravery to share that curiosity and the places it takes her with the world.

"She's a relentless mother and step mother, the BEST wife, all of her friends know she's their champion and no one wears clothes as well as she does. She's endlessly fascinating, succeeds at everything she does and drinks whiskey and eats fried food yet still manages to look like that. Happy birthday, Love. I know I'm not the only person to say, thank God you were born. I love you. (sic)"

Gwyneth - who has Apple, 15, and Moses, 13, with ex-husband Chris Martin - married Brad in an intimate ceremony at her Hamptons home on September 30 last year, and the pair will celebrate their first wedding anniversary next week.

But after a year of marriage, the pair only moved in together last month, as they'd decided to live separately at first to make sure they didn't rush into things.

Gwyneth - who is now step-mother to Brad's two children Isabella and Brody, whom he has with ex-wife Suzanne - said in August: "Married life has been really good. We took a year to let everybody [in the family] take it in and let the dust settle. And now we're moving in together this month. I adore my husband. He's brilliant and deeply kind. I feel like he's a real equal too. And he pushes me in the best ways. I really like being married. It's fun."