Chelsea Handler is "open to relationships" and wants to find love, after having previously said she's happy being single.

Chelsea Handler is "open to relationships". The 44-year-old comedian and television host has previously said she's happy being single, but after going through therapy that taught her how to be "vulnerable", she's now admitted she would like to find that special someone.

She said: "I have changed my mind about being open to relationships, because I thought I was tough for a really long time.

"And what I learned through therapy is that being really tough is actually being vulnerable. And being able to admit that you want to be in a relationship, you know, and I thought I would sound weak if I said that."

Chelsea said that whilst she does want to find "someone to love", she knows she has a "pretty good life" so wouldn't be disheartened if love doesn't come her way.

She added during an appearance on 'The Talk': "And listen, I have a pretty good life, so I'm happy if I don't find a relationship, but I would love to find someone to love."

Previously, Chelsea revealed she will happily turn to apps like Tinder to find a "hook up" when she's on the road, and said she approaches her love life like "a regular person".

But she admitted her reputation for speaking about her exes on TV has made her dating life harder.

Chelsea added: "I don't know [why,] but there's something about women having bold personalities that excludes a certain portion of the male population from wanting to go out with you.

"I know a lot of men are scared to go out with me because they think I'm going to talk about them on TV after [we] break up and they're not wrong - I've done that in the past, so I have to accept responsibility. If that means I remain single for the rest of my life, than maybe I wasn't supposed to meet anybody." 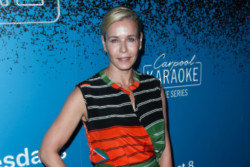