Jennifer Lopez surprised her ex-husband Marc Anthony on stage during his New York concert to sing their 1999 hit 'No Me Ames'. 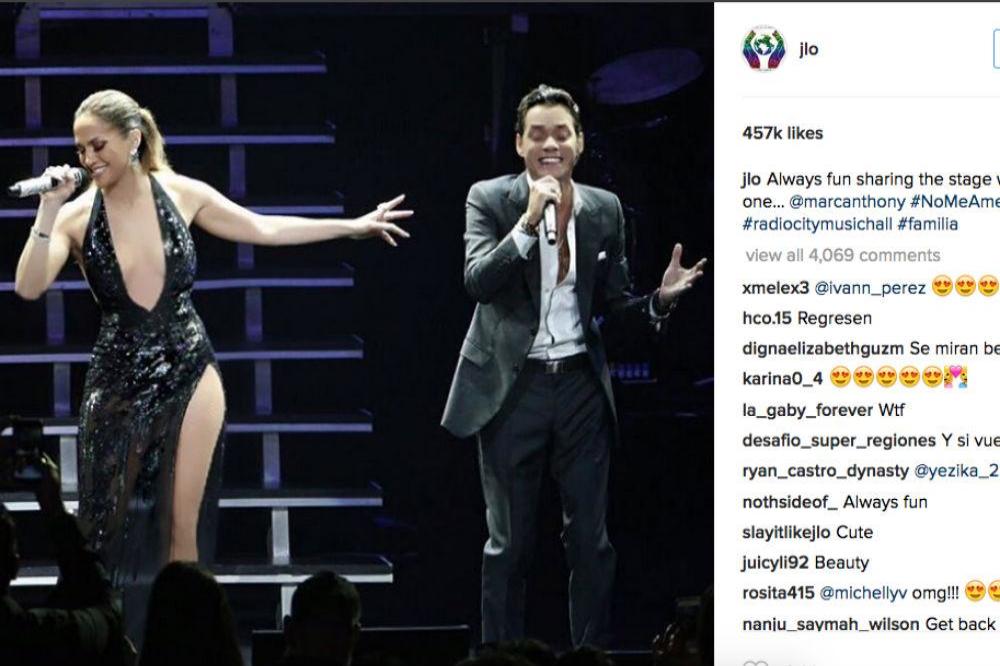 The 47-year-old singer's recent split from Casper Smart seemed far from her mind when she joined her ex-husband during his concert at the Radio City Music Hall in New York City to sing their Spanish hit 'No Me Ames' and later shared a picture of the moment on Instagram.

Dressed in a sequenced black gown that featured a plunging neckline and thigh-high split, J-Lo belted out the words to the love song they released together in 1999 - five years before they walked down the aisle.

When they finished the rendition the former couple - who finalised their divorce in 2014 and share custody of their eight-year-old twins Max and Emme - warmly embraced and as the brunette beauty left the stage, Anthony, 47, said: "Wow...The queen!"

Jennifer announced her split from Casper, 29, three days ago, reportedly after he opted to head to Las Vegas to watch the Conor McGregor/Nate Diaz fight rather than attend Ron Perelman's Hamptons fundraiser.

However, it was said to be "very amicable".

A source shared: "Jennifer and Casper have split. They have not been together for a few weeks. It wasn't anything dramatic and they were on good terms - it just came to a natural end.

"They will remain friends and they see each other, but they are not together. It was very amicable."

Meanwhile, sources close to the pair insisted they have split up and got back together time and time again and there is a good chance they will rekindle their romance once more.