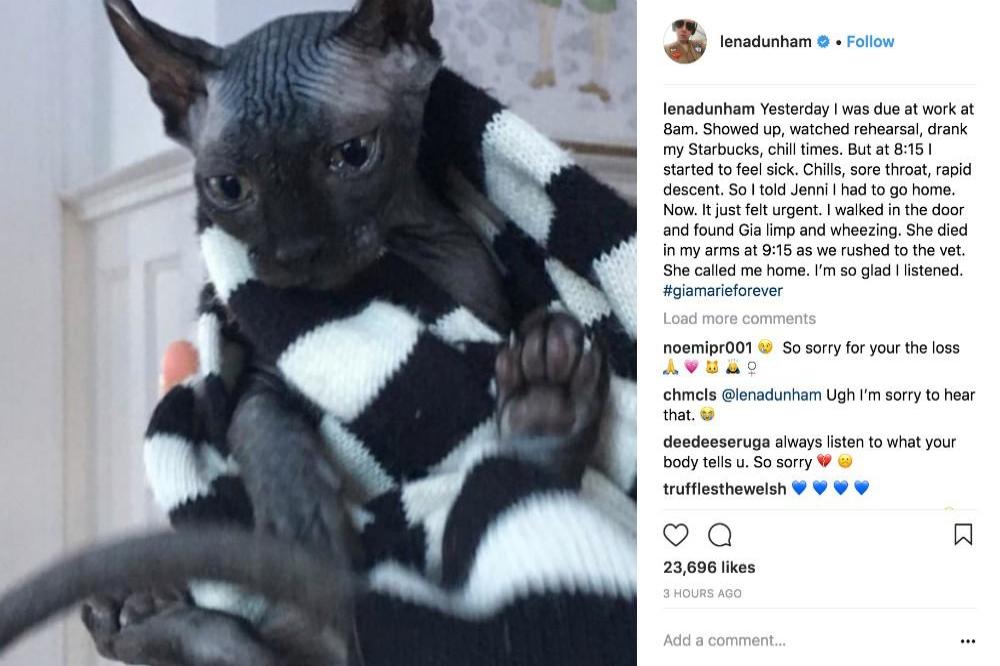 The 32-year-old actress is currently in the process of dealing with her "heartbreaking" split from longterm boyfriend Jack Antonoff, but has been struck by tragedy once again as her beloved cat Gia Marie has passed away.

In a series of posts of the black cat on Instagram on Thursday (14.06.18), the 'Girls' creator wrote: "How do I even begin to type these words: this morning we lost the beautiful Gia Marie. It was sudden and beyond anyone's control and @greer_lankton_archives_museum and I were holding her in our collective arms during her final moments. Gia loved people, playing with colorful tulle and above all she loved her sister Irma. She was my love, my dearest companion, and her kisses and hugs made every morning a celebration. Our hearts are broken, but we will never forget the nine months she graced this pained planet with her radiance. #giamarieforever (sic)"

Lena also posted a separate pictures of her cat, in which she said she would "never forget" her.

On Friday (15.06.18), Lena took to social media yet again to post another image of the adorable cat, which detailed how the poor pussy - who was "limp and wheezing" - passed.

She wrote in the caption: "Yesterday I was due at work at 8am. Showed up, watched rehearsal, drank my Starbucks, chill times. But at 8:15 I started to feel sick. Chills, sore throat, rapid descent. So I told Jenni I had to go home. Now. It just felt urgent. I walked in the door and found Gia limp and wheezing. She died in my arms at 9:15 as we rushed to the vet. She called me home. I'm so glad I listened. #giamarieforever (sic)"