Meghan, Duchess of Sussex, has nicknamed herself a "pwife" in honour of the time she spends watching husband Prince Harry play polo.

Meghan, Duchess of Sussex, has nicknamed herself a "pwife".

Duchess of Sussex is a 'pwife'

The former 'Suits' actress has forged a close friendship with Delfina Blaquier after watching their respective husbands, Prince Harry and his best pal Nacho Figueros, playing polo together in recent weeks and their stint on the sidelines together has led to them coming up with a new term for women watching their partners compete in the sport.

Delfina shared a photo of herself and Meghan watching polo and wrote on Instagram: "M - looking forward to many more of these times with you and H.

"Getting to spend time together over these 2 months was so special. I wish everyone new you the way you are. My sister [heart emoji], my now fellow “pwife” (polo wife) -genius of you to come up with this [laughing emoji] -

"You also have my respect. Keep walking, steady and strong. Listen to your heart, that will guide you well, bc you have a big one and it’s a beautiful one. I love you my darling [heart emoji]

"Can’t be possible, that this is the only #pwife picture we have together [eye roll emoji] Vamos #LosPadresPoloTeam !!!(sic)"

Harry and Nacho's team, Los Padres, lost in the league final earlier this month but Delfina praised her husband for his efforts.

Sharing a photo of herself and daughter Aurora embracing Nacho - which she credited Meghan for taking - she wrote: "This shot sums it all up.

"Yesterday we may have lost this game, but it was a win since you decided to go for this team and build something even more special and powerful.

"Love supporting you and love standing by you. #lospadrespoloteam (sic)" 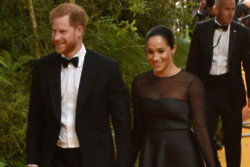