Meghan, Duchess of Sussex, is being sued by her half-sister, Samantha Markle, who has accused her of defamation because of comments she made in her interview with Oprah Winfrey.

Meghan, Duchess of Sussex is being sued by her half-sister.

Meghan, Duchess of Sussex, is being sued

The 40-year-old royal and her husband, Prince Harry, sat down for a tell-all interview with Oprah Winfrey last year and Samantha Markle has been left unimpressed by the "rags to royalty" narrative detailed by the duchess, which she claims is false.

In documents from the defamation lawsuit obtained by TMZ, Samantha accused Meghan of spreading lies in order to promote the idea she's overcome a difficult family situation, and highlighted the fact the former 'Suits' star told Oprah she was an "only child", despite sharing the same father in Thomas Markle as Samantha and her brother, Thomas Markly Jr..

The writer also disputed Meghan's claim in the interview that she'd last seen her half-sister "at least 18, 19 years ago and before that, 10 years before that", and that Samantha only changed her own surname back to Markle when the former actress began generating headlines for her relationship with Harry.

Samantha claimed Meghan has fabricated stories of growing up in "virtual poverty" because her dad paid for her to attend dance and acting classes, and "elite and expensive private schools".

And despite the duchess' claims to Oprah and talk show host Ellen DeGeneres that she worked hard to put herself through university, Samantha insisted their father covered the costs of Meghan's tuition and living expenses at Northwestern University.

Samantha accused Meghan of lying about her and her childhood as part of a calculated effort so they "could not interfere with or contradict the false narrative and fairytale life story concocted by" the duchess.

Samantha has claimed her estranged relative's comments have damaged sales of her autobiography, 'The Diary of Princess Pushy's Sister', prevented her from getting work, and caused emotional and mental distress.

A lawyer acting on behalf of the duchess - who has children Archie, two, and Lili, eight months, with Harry - branded the lawsuit "baseless and absurd".

Michael Kump said: "This baseless and absurd lawsuit is just a continuation of a pattern of disturbing behavior. We will give it the minimum attention necessary, which is all it deserves." 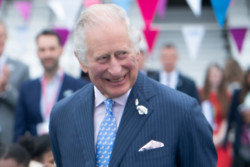