Nicole Scherzinger speaks exclusively on marriage, men and her ‘war’ with Cheryl Cole

X Factor judge and girlfriend of Formula One driver Lewis Hamilton 'Pussycat Doll' is credited for causing men everywhere to think, "Actually I do wish my girlfriend was hot like you," Nicole Scherzinger has revealed that she used to be self-conscious and gangly. Speaking exclusively to Cosmopolitan, she states that she didn’t belong when she was young and considers herself ‘goofy’:

"I was a very quiet, shy child. I grew up in a small town, Louisville, Kentucky, and there weren’t too many Hawaiian-Filipino girls, so I stuck out like a sore thumb. I didn’t look like everyone else and didn’t feel I belonged.. But these things only build character and make you stronger. It taught me to grow into the woman I was to become."

"I was so awkward and lanky, the only time I felt comfortable was escaping to my room with my boom box, listening to Whitney Houston, singing at the top of my voice and wanting to be her. So now when I get onstage and hear the music, I take on this larger-than-life persona with a lot of confidence, attitude and strength. In normal life people say, ‘You’re so different than on stage!’ Offstage I’m down to earth, simple and a very goofy girl!.. I like to make goofy faces, be dorky and not take things too seriously. I just love to laugh."

Discussing body-confidence, she reveals her biggest challenge when joining the Pussycat Dolls was showing off her body and learning to accept who she is:

I’ve never had a one night stand

"Growing up I was very conservative in my wardrobe, so when I first joined the Pussycat Dolls, the biggest challenge was wearing those cabaret costumes. I didn’t feel comfortable showing my body so much, showing my legs and butt, chest and midriff. I wasn’t used to it so I had to really grow as a woman and learn to accept myself and my body, find that inner confidence and strength, and love myself for who I was."

Now, she’s comfortable in her skin and a fan of curves:

"It’s important for a woman to feel good in her clothes. It’s OK to have curves and to work them. And guys like that too!.. I don’t believe too much in diets, having tried every one out there. It doesn’t work. It’s more about having a consistent diet in everyday life. I don’t believe in depriving yourself of anything - balance, moderation and staying active works."

Commenting on her guest appearance on the X Factor, she believes it’s her sheer hard graft which made her able to identify with the contestants and understand what they were going through:

"I didn’t come into fame quickly. It was a lot of hard work and it took many, many years before I got my big break with the Pussycat Dolls. I’d been in a rock band and even got my start from the reality series Popstars. That’s why it’s so great to be on The X Factor - I can empathise with those people. I’ve been there. I’ve done that whole audition process."

As for her alleged ‘war’ with Cheryl Cole, she discloses that things couldn’t be further from the truth:

"I have to distance myself from what you read in the tabloids because I’m very sensitive to that stuff. I think it’s the word ‘bollocks’ that you would use?.. I just think it’s absolute bollocks when I read it. Where did they come up with these things? I’d never even met Cheryl and they were saying all this stuff. I think they were trying to start a rivalry between us, but it’s all silly and, at the end of the day, you just have to laugh about it because it’s not real."

Speaking about her relationship with Lewis Hamilton, it seems a little Italian cooking and a good old-fashioned mix tape goes a long way:

"I think a great way for anyone to keep a romance alive in a relationship is to know how to cook a couple of your partner’s favourite meals. I make a really good lasagne - my mum taught me how. And I don’t know many men who don’t like a good lasagne! And I still think that making a mix tape is romantic, sweet and from the heart."

When asked what people might be shocked to find out about her, she replied:

"I’ve never had a one night stand."

Commenting on the recent stories of cheating sportsmen, she’s dismisses any worry about the same thing happening to her:

"I definitely can’t comment on Tiger Woods or Ashley Cole because I don’t know their stories. I just know that cheating in general, whether you’re a man or a woman, isn’t good. The most important thing in a relationship is trust. I know I wouldn’t want to be cheated on, so I just wouldn’t cheat myself. And in my relationship, I feel very confident that we wouldn’t have that problem."

The full interview appears in the November issue of Cosmopolitan. 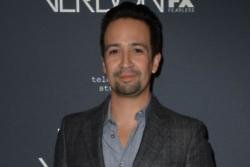 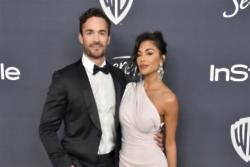 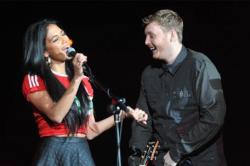