Book Story And The Age Of The Page

Ben Glasstone tells us about the inspiration behind Book Story.

By Ben Glasstone (Artistic Director of MONSTRO Theatre, the Pioneers of the Puppet Musical) 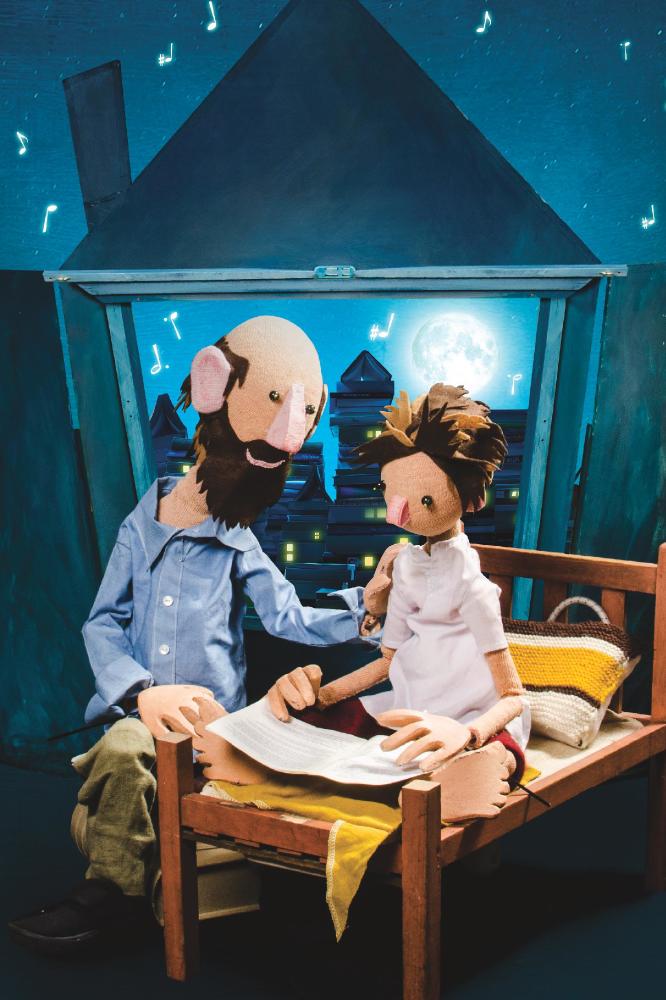 About ten years ago I was staring at a shelf of oversized books in a library and I began daydreaming.  Imagine if these ill-assorted books were all different characters: an edgy Thriller, a whimsical Book of Wildflowers and a highly practical DIY manual.  Why are they all stuck on a shelf together and how do they feel about it?  What happens when the librarians go home?  It seemed like a fun idea for a puppet show, I thought.  Sort of like Toy Story, but with books.  I could call it Book Story.

The idea lurked for a long time in the recesses of my mind until a few years ago, when I decided to really try to pursue it and create a show about books, in which the main characters were books.

Of course it would have to be a musical.  (In 20 years of making theatre I’ve never knowingly been involved in a show that I didn’t attempt to turn into a musical).  I’d done singing mice before, singing Christmas stockings and even a singing key - for Alice in Wonderland at the Little Angel - so why not singing books?

I began writing and it wasn’t long before I had confused myself thoroughly.  But I remained very excited about the possibilities of books-as-characters.  There are so many tasty analogies: we like to think of our lives as having a “story” (like books); we long to be loved, as books long to be read, and fear being “left on the shelf”; we are limited by our pre-defined characters as books are by their genres.  I imagined the library books treating each “borrowing” as a sort of holiday, an exploratory jaunt from which they were relieved to return to “their old shelves.” And what of the books that were damaged or becoming obsolete?  What happened if you were selected to be Withdrawn for Public Sale?

Most of these idle fancies fell by the wayside through a long process of writing, devising, showing work in progress and all of the convoluted business of trying to transform a good idea into a real-life theatre show.  But one of the things that I mused quite deeply on was the notion that, in this digital age, where all the traditional forms of media seemed to be dissolving into a seamless sea of information, there was something deeply reassuring and relatable-to in the finite nature of a book: a story, a thesis, an argument with a beginning, a middle and an end, bound permanently between its covers.

I have a son who’s quite computer-minded and he’d recently decided he prefers reading on a Kindle to paper books.  And why not?  Isn’t it infinitely more convenient to be able to have all your books neatly contained in one slim slice of tech?  Why lug a ton of Tolstoy off to Torquay? (Not that my son was reading Tolstoy – or that we were holidaying in Devon).  But, having started thinking of books as characters, I now couldn’t help imagining what sort of character this thin grey Kindle would make.  He (or she?) would certainly be a threat to the paper books – might he spell their doom?  As they pondered fearfully such existential questions as “What happens to the books that get put in the Withdrawn box?” the Kindle would look down its aquiline grey nose at them and point out that it didn’t much matter: all of them were doomed.  Who needed books these days?  They could all be contained within one tidy grey rectangle.

In the long process of making and re-making Book Story (three different fully staged versions of the show, and another three work-in-progress versions!) the character of the Kindle moved from a full-blown seeming-antagonist-who-suffers-a-big-identity-crisis-and-turns-out-not-so-bad, to a tiny bit-part somewhere in the second half.  But trying to work out its character prompted much thinking about our feelings about books and computers and our relationship with the Digital Age – and that thinking has informed the show.

The main question I kept coming back to was: why is our age so nostalgic about paper books, vinyl records, and all the other obsolescing technologies of the Analogue Era?  It seems that those born into the computer age like nothing more than vintage clothes, wonky typography and dusty old tomes.  Why do we feel a greater fondness for them than for our shiny phones and Tablets?  Well, principally - I have come to believe - because Analogue things are things.  They have integrity.  They are what they say they are.  A computer is, by definition, a “Universal Machine” (that’s the term Alan Turing, who basically invented the modern computer, used to describe his idea). That is, it can be anything you want it to be.  And that’s not something we can easily trust or relate to.

So, in my (somewhat too complicated) first version of Book Story, the Tablet character initially seemed to be lording it over all the paper books on the library shelf.  Their days were clearly numbered, he could contain all of them and was essentially immortal, un-withdrawable.  Naturally enough the paper books didn’t much care for this supercilious newcomer and tried to challenge his disturbing ideas.  But as the plot thickened (to a mud-like consistency) we started to see another aspect to the Tablet: was he really so arrogant? Did he really feel so superior to the books?  On the contrary, his behaviour was born of jealousy: all the books had a clear story, a beginning, middle and end – the Tablet, on the other hand, was a constantly-updated, Google-connected jumble of information. He longed to know who he was, like those books.

Such was the dramatic exposition of my theory that we love books because we long for our own lives to have a story and that we relate to them (better than to computers) because they are mortal and perishable like ourselves.

Admittedly, some people may have felt that I wasn’t altogether making sense and that trying to expound such ideas in a family puppet musical might be a tad over-ambitious.  So after an enthusiastic but not entirely conclusive response to the second production of Book Story, I worked with some new collaborators to simplify the story right down to its bare essentials.  The Tablet got cut (almost) as did the books’ metaphysical journey into the chief librarian’s brain (don’t ask) and we ended up making a rather sweet, touching and funny family show about a sad librarian and the books who help restore his happiness.

A happy ending to the story.

Come and see it on tour, beginning at Little Angel on September 27th suitable for anyone 5 years or older