10 Things that make me laugh by John-Luke Roberts

John-Luke Roberts writes a piece for us ahead of his new show All I Wanna Do at the Edinburgh Fringe Festival.

I was waiting in a reception of a fancy office building. There was a fully grown, sensible-looking adult man waiting very casually, sitting next to a suitcase. The receptionist turned his back for a moment and the man leapt up, grabbed a handful of sweets from the bowl on the desk and shoved them in his bag. Then he threw me a look as if to say “don’t tell” and sat down like nothing had happened. And I was just sat there thinking “but the sweets… the sweets are *there* for people to take”. 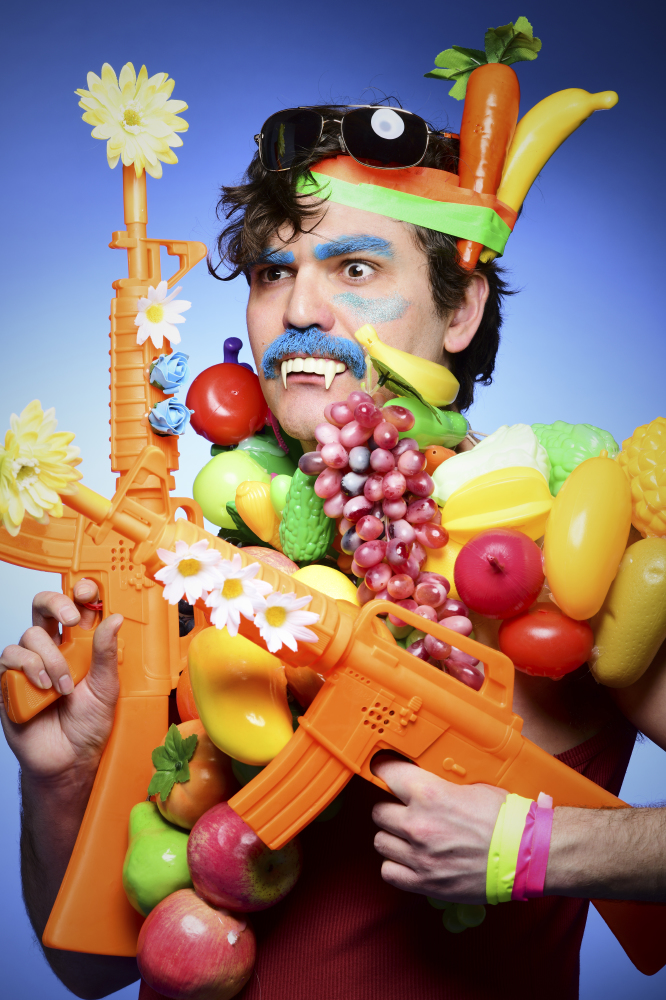 Being somewhere where you’re not meant to laugh.

Terrible one, this. I think it comes from a catholic upbringing (lapsed now). There’s a single panel cartoon of Moses at the parting of the red sea looking at one of the people he’s just saved and saying “What do you mean It’s A Bit Muddy?” A perfectly good joke. But when whispered by a sibling during an old testament reading at the Easter Vigil it’s the funniest thing ever. I’ve managed not to laugh at a funeral yet.

There’s a video called Kilroy Loops. It’s all of ex-UKIP representative Robert Kilroy Silk’s TV show introductions, one after another after another. It’s absolutely hypnotic and baffling and sends me into tears of laughter every time I watch it. If you stare into the heart of it for long enough you begin to understand how the world got in this state.

This Sketch from the Old Chris Morris Series Jam

Such a simple, stupid premise, performed so weirdly.

I walked into a plate glass door the other day. It was brilliant, but it hurt.

Pretending to be Alan Bennett

I joined my mum on a cruise around the Hebrides and started loudly narrating the whole thing in an Alan Bennett voice, calling her “my poor widowed mother”. Things reached a head when the group went to a whiskey tasting and I said “careful, mother, you know what you get like”. She very kindly bought me a bottle of whiskey, a moment I ruined by saying “Mother ostentatiously handed me a gift wrapped bottle, saying “I’m very good to you”. As if we didn’t both know she’d be the one necking it on the Megabus home.”

Q. What do you call and exploding monkey? A. A Baboom!

It’s better if “Baboom” is said loudly, with hand splayed and eyes wide. It’s even better if delivered by your three year old nephew. And is, incidentally, one of the few times you’re allowed to laugh at your three year old nephew. You can’t laugh at him if, for example, he puts his shoe in a drinking cup, because it will encourage him to put his shoe in a drinking cup. Even though a shoe in a cup is actually really funny.

I did a show earlier where I interviewed my living family members about the dead ones. My aunt (who is a nun) told a story about my grandmother: “I remember when I was a teenager, and I was very, very thin. And she was just nicely plump. And she said “You’re just a little bitch”, and I said “and you’re a great big fat one””. Let me tell you, you’re never prepared for a tiny nun in full habit and wimple saying that.

I absolutely lost it at an aubergine once.

Just couldn’t stop laughing - it wasn’t shaped rudely or anything, I just found the idea of an aubergine very funny. That’s probably the best kind of laugh - really, really laughing and not knowing why.

See John-Luke Roberts: All I Wanna Do Is [FX: GUNSHOTS] with a [FX: GUN RELOADING] and a [FX: CASH REGISTER] and Perform Some Comedy at Assembly George Square throughout the Edinburgh Festival Fringe from 1st – 27th August. For tickets visit www.edfringe.com