Lauren Gauge Discusses The Inspiration For Her New Show 'The Unmarried'

Lauren Gauge talks to us about her new show The Unmarried ahead of the Edinburgh Fringe Festival.

The Unmarried is a truly original production that’s boldly cross-genre. Sharp comedic and poetic writing laced with explosive musical beats. This is theatre you can rave to. 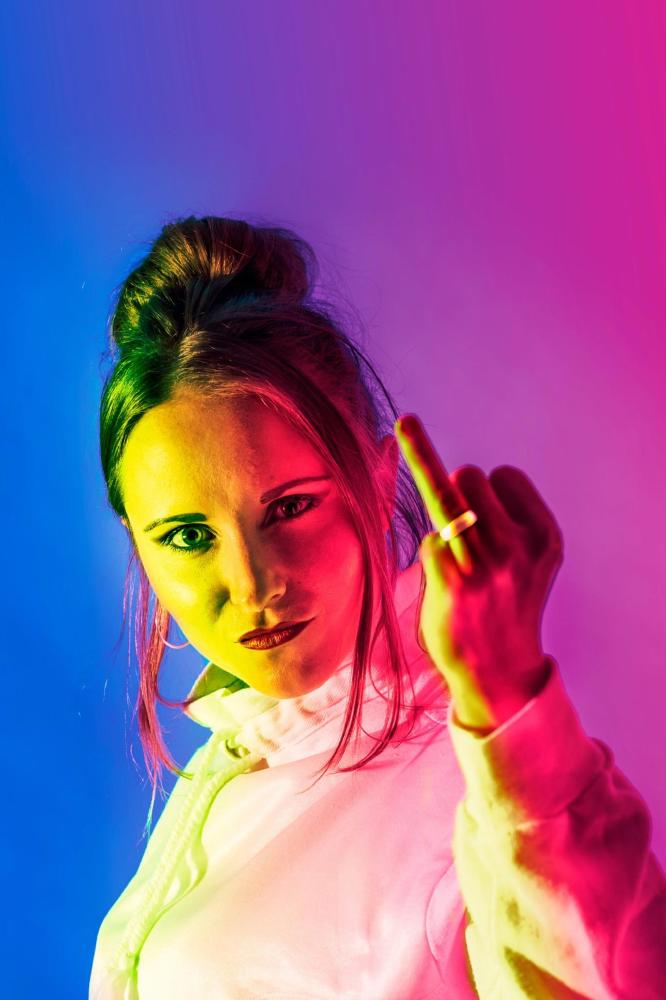 Rhythmically underscored by a live mix of beat boxing 90’s Dance hits and old school UK Garage. Award winning performer-writer Lauren Gauge explores with cutting comedy, the feminist defiance of the legacy of a patriarchal society that nearly succeeded in defining the hopes of a generation.

The story we tell is a raw, feminist, physical, comedy. Luna is a bold a brass lager lout on the prowl for wild times, putting two fingers up to society's expectations whilst in a 7 year long relationship with a man who is starting to resemble the system.

The Unmarried by Lauren Gauge: World Premiere at the Edinburgh Fringe Festival (Underbelly, Med Quad) 2nd – 28th August 2017, after sell out previews whilst in development at Lyric Hammersmith and Camden People’s Theatre.

'Raw, electrifying... Kate Tempest-esque... guaranteed you'll laugh with her and dream with her.' ★★★★★ LondonTheatre1.com

What was you inspiration for the piece?

The Unmarried is about being a woman and searching for happiness and acceptance in a capitalist patriarchal world. Luna knows what she wants, but she doesn’t know how to be an adult woman in man’s adult world. It’s also about empowerment, sex, freedom and love.

The Unmarried started by accident when I won a new writing call out for Lyric Hammersmith and scratched a short excerpt for Evolution Festival. It started as a series of poems, got branded with comedy, underscored by beatboxing and songs from the 90’s and titled a ‘gig theatre’ piece; it’s a comedy of my life, really. I got bored of auditioning for women I had very little in common with or very little connection to and started creating theatre in collaboration with other artists. Of course, when I realised how dry my life is I dramatised The Unmarried and Luna to live vicariously through her antics instead!

Her world is full of fun and pleasure seeking and in some senses that candor and purity is what makes her relatable and potentially unlikeable. I hope the audience take from it what they want – enjoy the night of Garage music, dance and entertainment, but that they feed off her sense of freedom and liberation to be able to make better choices in life. Luna’s flawed but inspirational because she’s honest.

That rawness is something I have – more of a flaw than a gift, but still I’m trying to harness it by listening to audience’s laughter and reactions, not taking comparisons too seriously; and trying not to conform so as to keep things real. Edinburgh could be a right laugh if people come along to see the show at Underbelly. We’re in this together and it’s a whole hog more of a laugh with fuck ups and stories - bad sex, great music and good people to share in the experience!

Luna is ‘The Unmarried’ - the central character of the play. Sharing her story whilst in-development at great venues I hugely respect like Lyric Hammersmith and Camden People’s Theatre and with writers I admire like Simon Stephens, was a massively playful, exhilarating, learning curve.  Being compared to Lena Dunham, Kate Tempest and Phoebe-Waller Bridge since is an amazing thing; they are artists I hugely admire. But it is also quite dramatic, right? They are incredible women writing insanely brilliant things. I’ll pocket such comparisons as mega compliments, ones to keep in the locker for the rainy days when our confidence needs a cheerleader. I totally see why people draw comparisons - three women telling powerful female stories about women who have sex drives and brains and who are poetic or funny – these stories are disproportionately rare! But one of the points of The Unmarried is Luna’s character battling to fight off labels and expectations, and then bang I’ve saddled my audience with yet more comparisons and expectations – classic plot cycle!

To what extent are comparisons a help or a hindrance? Sure we can get grouped together for a feminist article and lorded female writer-performers telling jokes and being sexually explicit about those characters’ wants and needs but also, we’re telling vastly different stories, in different genres and The Unmarried is distinctive because it’s a fusion of the three – poetry, music and comedy and also Luna comes from a working class background so her story is coloured with other kinds of struggles, a struggle perpetuated by a system she accidentally subscribed to once, and now like a hangover from a one night stand she has to rebel against it or risk losing herself in it… unless of course, she can shag, masturbate, or rave her way out! But she’s got way more in her arsenal than sex. Women are incredible and complex beings (in exactly the same way men are) and yet we don’t get to explore our sexuality, our intelligence, our emotional complexity in the same way that male characters get to on stage.

Luna is raw, sassy and full of fight but she is also wise to the patriarchy, how it doesn’t help anyone, least of all men, certainly not women. I am always fascinated by the power of comedy and music to propel important truths into an audiences' hearts. Her sense of freedom and anarchy much like Garage music is infectious. So The Unmarried is for everyone who is willing to challenge the status quo, rebel against labels that entrap us, and go for life and love with integrity. I can’t wait to share and unleash it in Edinburgh! Warning: we promise to challenge the hangover from the patriarchy but can’t be responsible for the hangover of the night out afterwards!