10 Things that make us laugh by Nick and Joe

Nick and Joe write a piece or us ahead of the Found Footage Festival.

The Found Footage Festival is a pretty unique show in which a couple of childhood best friends put on the ridiculous VHS videos they have found in thrift stores and bargain bins (also regular bins) up and down the United States. Here they tell us what makes them laugh... 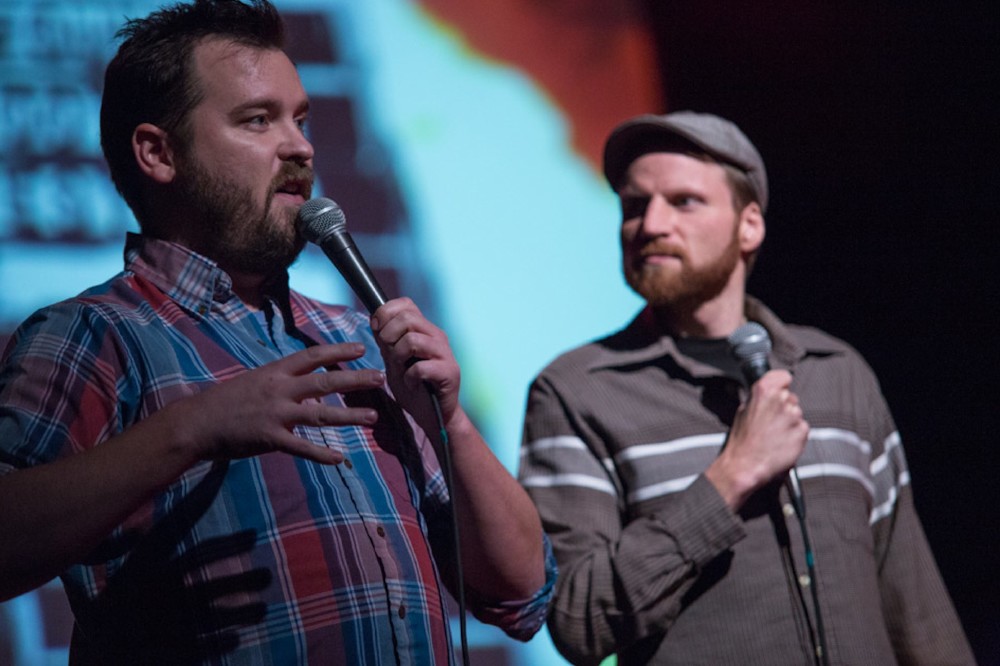 Out of Control Acceleration

Nick Prueher (Found Footage Festival): [Co-host] Joe [Pickett] and I have been friends since we were 10 and we've been watching "America's Funniest Videos" together for almost as long. This is the U.S. equivalent of "You've Been Framed" and features the typical home movies of kids being dumb and dogs acting guilty, but "out of control acceleration" on a motorcycle clips get us every time. Some guy or girl who's never been on a motorcycle before hops on, gets some basic instruction, and the next thing you know they're speeding off without any idea how to stop. It usually ends with them running into a fence. I'm laughing just thinking about it now.

I love it when some idiot is trying to show off on the dance floor, maybe dancing on a table, and then karma kicks in and he falls spectacularly. It's the universe course correcting.

This foreign wedding with fireworks

We love everything about this wedding video: the wedding song, the bad audio, the fireworks that are thrown at random intervals - INDOORS! - that terrify the bride. It's as tense as the drug deal scene in "Boogie Nights" but it's a real wedding.

Joe and I have found dozens of videos where corporations include "rapping" in their training videos, but the "Super Broker Shuffle" is the holy grail. It features a bunch of supermarket "brokers" who rap about placing their products in grocery stores, with as much rhythm and soul as you'd expect from supermarket managers in 1987.

Dogs Who Think They're Trying To Help

I have a dog named Marty and he often tries to protect me by barking at people he sees as a threat. Mostly children, the elderly and the handicapped. In this video, a dog bravely tries to protect his people from a roman candle.

There are a lot of videos of "Jackass" wannabes out there, but "Ray's Last Jump" stands above the rest. The behind-the-camera narrator has got a way with words ("dickered," "cattywompus," "showerin' the place with rocks") but his inebriated neighbor Ray steals the show by suiting up in cardboard armor and taking ill-advises jumps in a junkyard.

Jacy was a punk rock kid with a green mohwak working in a children's clothing store in our hometown but we didn't meet him until college. Now he lives in the woods and makes videos and writes for "The Onion" and "Clickhole." Here's an unboxing video he made about shorts.

A few years ago, we found a video called "Sing-Along with Frank Woehrle" at a thrift store in Wisconsin. It stars a mustached man in a cowboy hat who sings old standards with the lyrics onscreen so you can sing along. We fell in love with the video and called the number on the back to find out more information. Turns out, there were 19 more videos in the series! So we ordered the whole lot for $160, which to date is the most we've ever spent on VHS tapes, but we have no regrets. They're priceless.

Joe is more of a fan than I am but I think we both appreciate a certain amount of tedium. We watch old VHS tapes for a living and most of them godawful boring. However, there's a certain point when watching something tedious when it becomes so boring it's hilarious. And we like to subject people to some of that tedium whenever possible. In fact, Joe has started a regular segment on our internet show called "Joe's Tedium Corner." Enjoy!