RUSSELL CROWE SLAMS 'ONE-DIMENSIONAL' CLOONEYHollywood hardman RUSSELL CROWE has ripped into screen rival GEORGE CLOONEY for being too keen on starring in commercials, and for the former ER star's perceived inability to play anyone other than himself onscreen.The OSCAR-winning Australian has hit out at Clooney after negative comments made by the OCEAN'S TWELVE actor about Crowe's first love - his rock band 30 ODD FOOT OF GRUNT.Clooney branded the pet project a "bad use of celebrity".But Crowe is adamant his accuser's contracts to promote a wide range of products including BUDWEISER beer in the US, MARTINI and FIAT cars in Italy, and suits in Spain is the real manipulation of celebrity status.Crowe says, "I had a good laugh when Clooney tried to compare doing ads for suits, and a car and a drink to what I do as a musician. An endorsement is about money. My music is from the heart."Not content with slamming his rival's commercial appearances, the GLADIATOR heart-throb rubbishes Clooney's acting ability and career motivation.

He adds, "The job is to take on other characters, otherwise you could just call every character you play the same name. What's the character in this film, George? George, is it? George plays George in the new movie, George.

"I believe if you take on characters for a living, you can't make yourself into an icon in order to sell a pair of shoes." 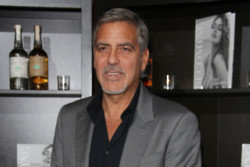 George Clooney is a 'fun dad' to his twins 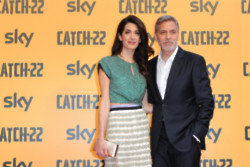