Joan Collins To Join Doctor Who

Dynasty bitch Joan Collins will play a Doctor Who villain in the forthcoming series of the hit British show, according to media reports. The 74-year-old Dynasty star is reported to play The Doctor's arch-nemesis Time Lady Rani.A BBC insider told British Newspaper The News Of The World, "Joan's perfect for the role."The Doctor Who team are delighted they've managed to sign Joan. It's a real coup."The sci-fi show was re-launched in 2005 with Christopher Eccleston in the lead role with the controversial choice of Billie Piper as his assistant. The show was a hit enticing a legion of new young fans to the forty year old programme and snared the Most Popular Drama. Most Popular Actor and Most Popular Actress at the 2005 National Television Awards.David Tennant stepped into the title role at the beginning of series two and enjoyed another succesful run with Piper who had stayed with the show and repeated the National Televiso Award triple.

After a popular third season without Piper they are currently filming seaon four with Tennant still in the lead role making him one of the most popular Doctor's and the second longest running behind Who legend Tom Baker. 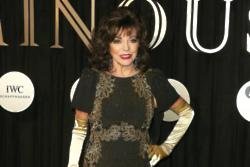 Dame Joan Collins thinks the news is 'too depressing' 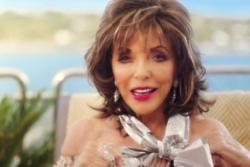 Joan Collins dishes on the key to a 'happy marriage'