Julian McMahon was united with his dying mom before she passed away on Friday (02Apr10) - after reportedly undergoing a back operation at the same hospital where she was receiving treatment.

McMahon then decided to check into care alongside his mom, opting to undergo surgery for a degenerative back problem, reports the Sydney Daily Telegraph.

The star checked out of the medical center on Saturday (03Apr10) - the day after his mom died after losing her battle with cancer.

The 77 year old will be remembered at a private funeral later this month (Apr10), which will be followed by a public memorial service.

McMahon has returned to hit TV series Nip/Tuck this year. notching up his one hundreth episode with the show.

He is currently working on new movie with Bruce Willis and Morgan Freeman with The Smell of Apples also in the pipeline. 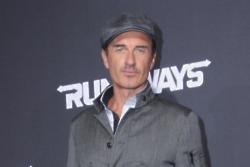