It's packed in a box with tissue paper, and it will be donated to a museum

Nicole Kidman plans to gift the yellow Dior couture dress she wore to the Oscars in 1997 to a museum.

The Hours star ensures all of her red carpet looks are archived and stored with care, but she has big plans for the special chartreuse outfit she wore to the Academy Awards.

She tells Harper's Bazaar magazine, "It's packed in a box with tissue paper, and it will be donated to a museum".

Kidman hopes to pass down the rest of her designer dresses to her children.

She says, "Whichever daughter loves clothes more will get dibs on all those. But I keep them in the same way that I'd keep a painting". 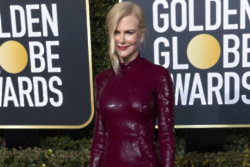