Despite all the bad news, there have been some great moments throughout 2020... 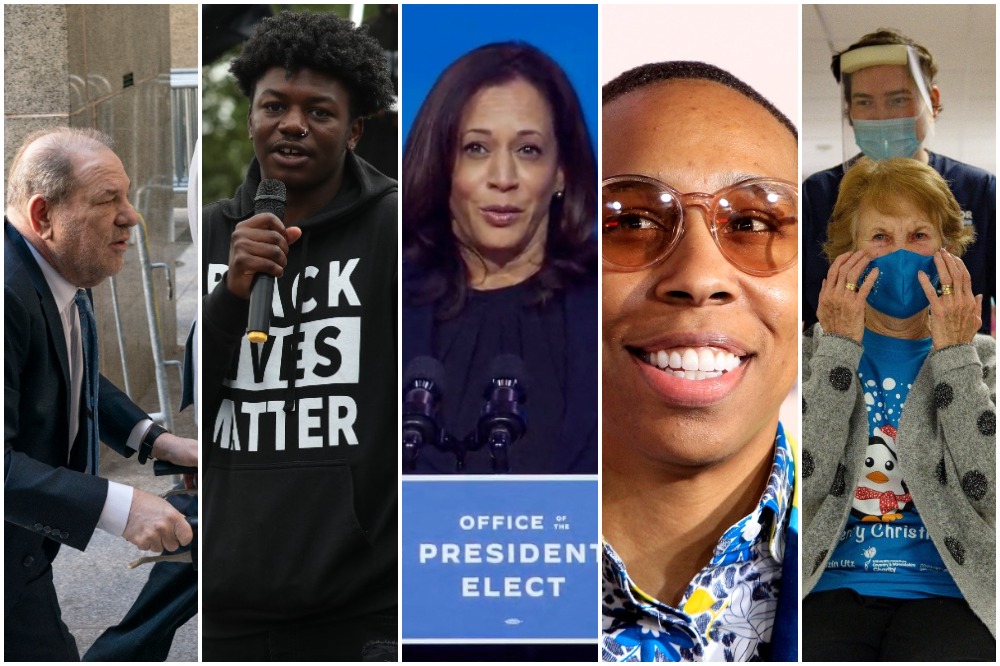 We’ve reached the penultimate day of The Female First Awards 2020 and whilst there haven’t been many reasons to celebrate throughout the past 12 months, there have been times when we’ve smiled from ear to ear, thankful that there is still good in the world.

To commemorate those fleeting yet wonderful periods, we’re taking a look back at some of the finest moments of the year. Here are our nominees and the winner for Moment of the Year 2020…

Harvey Weinstein is convicted and sentenced 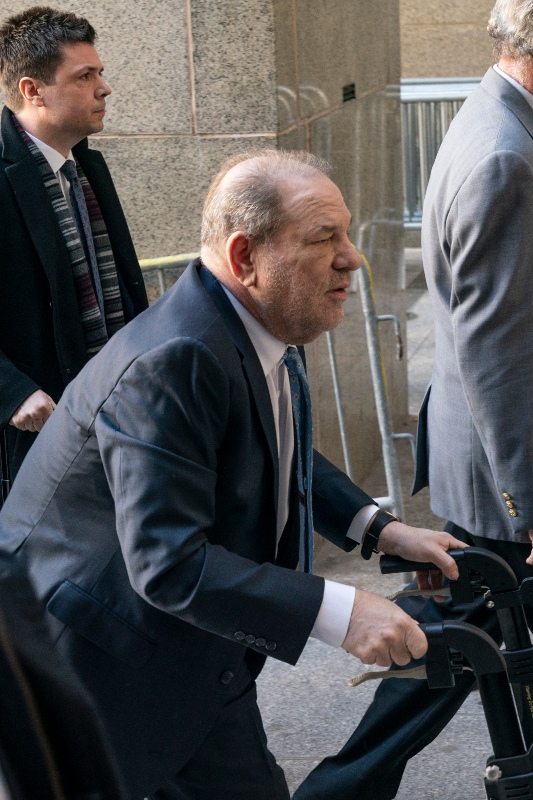 It had been a long time coming, but in March 2020, disgraced film producer Harvey Weinstein was sentenced to 23 years in jail after being found guilty of rape and sexual assault.

His dramatic fall from grace should have started back in the late 1970s when the first documented allegations were made against him, but it was in October 2017 when more than 80 women had made claims about him sexually abusing them that he was dismissed from his company, before being expelled from the Academy of Motion Picture Arts and Sciences.

In May 2018, Weinstein was charged by New York police with "rape, criminal sex act, sex abuse and sexual misconduct for incidents involving two separate women". $1 million bail was posted on his behalf, with a trial date set for January 2020. On that date, he was charged once more in Los Angeles with raping one woman and sexually assaulting another in 2013.

A jury deliberated for five days in his case, convicting him on February 24th, 2020 of two of five criminal charges: one of criminal sexual assault in the first degree; and one count of rape in the third degree. He was sentenced to 23 years in prison on March 11th. Justice prevails! A generation of new activists have been inspired by the Black Lives Matter movement, which aims to eradicate police brutality and inequality within the police force and indeed, throughout some of the most powerful offices and institutions across the globe.

The death of George Floyd on May 25th, 2020 spurred those disgusted at the force used by American officers against black people out back onto the streets once more, despite the ever-present threat of the coronavirus pandemic. They said that whilst they may get sick whilst protesting, this was a moment in history which doesn’t come about often; a time when black people’s voices are heard, reported on around the world and amplified. For many, that was enough reason to put their personal worries aside and take up the call to action.

The BLM movement has already achieved some victories. The use of chokeholds has been restricted by law enforcement in some of America's largest cities, with many of them also cutting funding to police departments. New york state legislature even repealed 50-a; a former law that obscured police disciplinary records from the public.

Of course, that’s not enough and this is just the beginning. It’s going to take grit and determination to ensure that those who are making their moves right now at what feels like the true beginning of the movement, continue to be heard against those who would prefer to keep black people oppressed. Keep up the good fight.

Joe Biden and Kamala Harris win the 2020 US Election No matter which side of the fence you sit on, seeing democracy prevail against the wannabe-dictator and outgoing President, Donald J Trump, was a thing of beauty. Even if you supported him throughout the election campaign, his calls for the result to be overturned simply because they didn’t go the way he liked should be more than enough reason for you to be happy he’s leaving the White House.

Centrists President-elect Joe Biden and Vice President-elect Kamala Harris may not be without their faults if you consider yourself a progressive, but they’re certainly a step in the right (well, left) direction if you’re fed up of the divisive and frankly backward policies implemented by the Trump administration.

Upon his inauguration in January 2021, Joe Biden will become the 46th President of the United States. With Kamala Harris by his side as Vice President, the Democratic Party may have just caught lightning in a bottle. The next four years are going to be very interesting indeed… Officer Specter is an openly gay police officer - albeit a cyclops - played by openly gay screenwriter Lena Waithe. Featuring in two scenes throughout the flick, we first see her chatting with a fellow officer about becoming a step parent, explaining: "My girlfriend's daughter got me pulling my hair out."

Whilst some would rightfully argue this is a token movement made, that’s come far too late and doesn’t push Disney’s inclusion far enough, it’s a welcome step in the right direction. Let’s hope many more come in the very-near future.

The first Covid-19 vaccine is administered 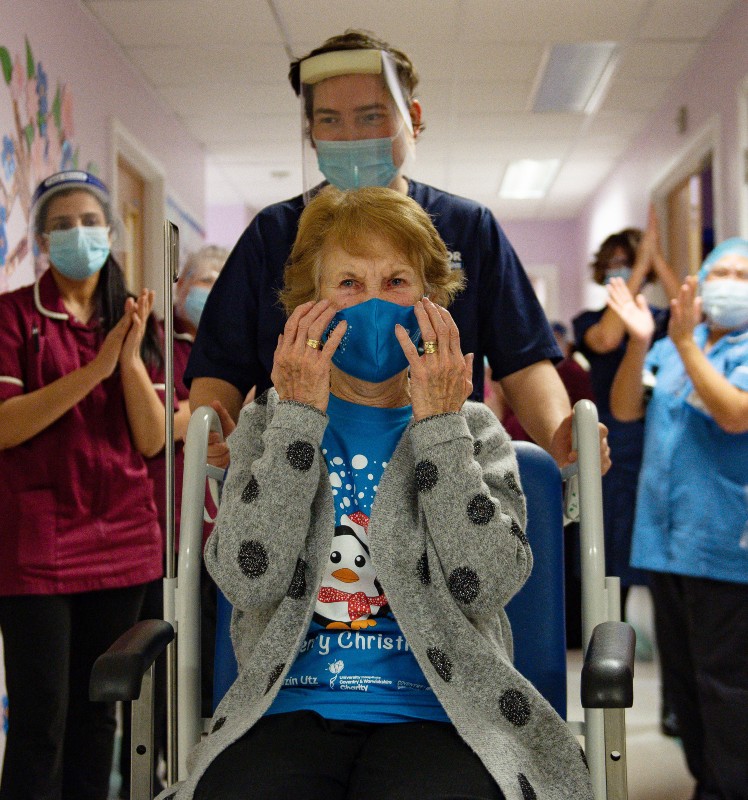 Margaret Keenan was applauded by staff as she was returned to her ward following her Covid-19 vaccine / Picture Credit: Jacob King/PA Wire/PA Images

After months of science, tests and trials, the very first official Covid-19 vaccine from Pfizer was administered right here, in the United Kingdom. Grandmother Margaret Keenan, who turns 91 this week, was the first to be given the injection at 6.31am GMT on December 8th 2020, which she said was the "best early birthday present”.

A gentleman named William Shakespeare was the first man and second overall to receive the jab.

With up to four million more doses of the vaccine to come, adding to the 800,000 that have been delivered, and the vaccination being rolled out in other countries worldwide, we can finally take some pride in moves being made by world leaders to protect their people.

All of them! Let’s face it, we’ve needed a lot of reasons to smile this year; so why make us choose?

MORE FROM THE FEMALE FIRST AWARDS 2020: Who’s our Content Creator of the Year? 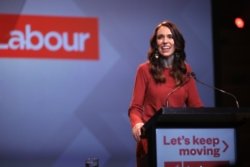