To conclude the 2019 Female First Awards, we examine the greatest moments of the last year. Unfortunately, there have been a lot of difficult times over the last few months from political tension to terrorist attacks, but these moments are the things that have got us through with hope and positivity.

We'd already made her our Heroine of the Year but we can't leave her out when we're discussing the 2019 Moment of the Year. She delivered a speech to rival the passion and conviction of Martin Luther King Jr. at the UN Climate Action Summit in September; we get emotional just thinking about it.

"This is all wrong. I shouldn't be standing here. I should be back in school on the other side of the ocean. Yet you all come to me for hope? How dare you!" She said. "You have stolen my dreams and my childhood with your empty words. And yet I'm one of the lucky ones. People are suffering. People are dying. Entire ecosystems are collapsing. We are in the beginning of a mass extinction. And all you can talk about is money and fairytales of eternal economic growth. How dare you!"

After the absolute carnage that was Infinity War last year, it's safe to say that Avengers: Endgame was the most widely anticipated sequel ever to hit the big screen - as indeed you'd expect after seeing a number of important Marvel figures fall in one movie. For the final movie of Marvel Phase 3, producers threw all the resources possible at it, making it one of the most expensive films ever made with a budget of around $356 million.

Endgame was so highly anticipated, that it ended up grossing nearly $2.8 billion worldwide, and became the highest-grossing film of all time, finally surpassing Avatar from 10 years ago. Hollywood sure knows how to end a decade.

Arguably the biggest meme of the year, Baby Yoda from Disney+'s Star Wars spin-off series The Mandalorian has taken over the world with his cuteness. We haven't been able to scroll through social media without a new meme popping up, but we're not even tired of it yet. Even if you're not a Disney+ user, you know who Baby Yoda is.

Me watching my husband cook a bomb 4-course meal while I stand there with my spatchy-spatch ready to stir something pic.twitter.com/FiVErtJyat

This was the best celebrity gossip moment of the UK for a long time. When WAG queen Coleen Rooney realised that someone close to her was selling stories to hte tabloids from her personal Instagram account, she decided to investigate and came up with a simple but smart trap. She blocked everyone from viewing her stories apart from one account belonging to the person she most suspected and proceeded to feed false information to this person.

This has been a burden in my life for a few years now and finally I have got to the bottom of it...... pic.twitter.com/0YqJAoXuK1

Pretty soon she realised that these stories were ending up in the press, and had evidence that only one person had viewed them. She had no qualms about revealing who it was very publicly, concluding "It's......... Rebekah Vardy's account". Naturally, her fellow WAG denied being involved, claiming that various people had access to her account. Whatever the truth, it had us more entertained than most gossip tales.

Not only that, but at the same time abortion was also decriminalised, giving back autonomy to women when previously it was only allowed if the mother's life was at risk, or at least of there was a danger of irreversible physical or mental damage. 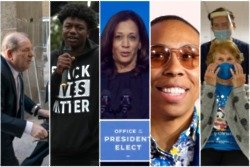