Whose most likely to win this year?

The nominations for the 61st Grammy Awards are set to be announced on Friday (December 7, 2018) and, after so many incredible albums this year and the end of last year, it's tough to call which records will get a nod this year. We've put together our top five predictions for Album of the Year as we await the results with eager anticipation.

Featuring hit song In My Feelings, Scorpion was at number one on the Billboard chart for five consecutive weeks, and has topped charts in more countries than any of his previous records. His last album, Views, was nominated for Album of the Year last year, and he ended up winning Best Rap/Sung Performance and Best Rap Song. It's safe to say Drake can pretty much count on at least one Grammy nod.

Post Malone's second output hit number ones across the board including three consecutive weeks in the US. He's yet to receive a Grammy, but we're sure he'll have a few nominations under his belt this year.

This record seems a weirdly long time ago now but it came shortly after the eligibility cut-off point last year. She received an Album of the Year nomination for her last two albums - Red and 1989 - and even won it for the latter. The attitude and honesty that went into Reputation truly deserves recognition once again.

It felt like a huge departure from her previous records, but we reckon that's the reason why Ariana could win her first Grammy this year. She received a Best Pop Vocal Album nomination for Dangerous Woman, but with songs like No Tears Left to Cry and God Is a Woman, she's truly become a mainstream phenomenon.

The Thrill of It All - Sam Smith

He's already won four Grammys but missed out on Album of the Year for his debut In the Lonely Hour. It's looking like he's in with a good chance of another shot thanks to the success of his follow-up, featuring single Too Good at Goodbyes. It's had positive reviews all round, so if it doesn't land an Album of the Year nomination, it'll sure as hell receive a nod in Best Pop Vocals. 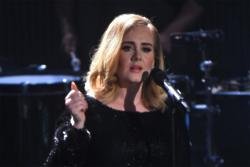