I think you can make anyone believe in anything – even magic – as long as you stick to two simple rules:

1) Give them an earth to sink their roots into; and

2) Don’t ask them to believe too much

Took my youngest daughter to the beach.

You can write a world in which an entire nation of people have the potential to be born with a magical gift – like the Rhyllians in the Sorrow books – but in order to sell that as truly possible, you have to make sure the rest of the world is recongnizable, and at the same time, forgettable. People can only believe so far – if you set a story in the Arctic tundra, but decide your icy deathscape will have palm trees growing there, you’re asking people to rewrite what they already know so to believe in that. If you then start adding in magic, or sky pirates, or giant purple alligators, you’re going to run into a few problems; namely the limitations of the human imagination and just how much disbelief we’re willing to suspend in order to have a good time. That’s not to say you can’t have magic, or sky pirates, or giant purple alligators, or even palm trees in frozen wastelands. You just can’t have ALL of them at once.

Because the object of fiction is to make the reader forget themselves for a little while. Think of writing a book as a game you’re playing with a reader – you can only win if they stop living in the real world and commit to living in yours for a while, and in order to do that, they have to believe in it.

It’s a heady, complicated thing to build a world; on the one hand you can do whatever you want, be a kind of god, doling out hair and eye colors, assigning families, lovers, friends, lives and destinies. You can sculpt mountains, create oceans, fills skies full of stars. You can add magic...

On the other hand, though, it all has to make sense. It has to feel real.

And it’s making things seem real that’s the secret weapon of fantasy writing. It doesn’t matter if you have magic, or mermaids or dragons so long as the world feels as if you could step into it and then promptly forget about it. While the world is never ever incidental in fantasy writing, most of the time it has to feel unnoticeable.

To create a fantasy, there has to be a basis in reality. Think of your own favorite daydreams and how they begin. For example: a chance meeting with that celebrity you have a crush on in your local coffee shop, perhaps? They bump into you, or vice versa, spilling your drink. You look up, enraged, your eyes meet and then… Well, that’s up to you.

The coffee shop might feel incidental but really it’s the unsung star of the show. It’s the routine, every day knowledge of the coffee shop and how it works that makes meeting the celebrity feel almost possible. The marriage of the mundane to the fantastical. While you’re scowling at your celebrity crush for ruining your outfit (let’s call that The Inciting Incident, and it’s a lesson for another day) meanwhile, the coffee shop is doing the real legwork of existing unobtrusively in the background, providing the essential canvas for the magic. You need the coffee shop to get to the magic. And that’s how I write fantasy – the magic is only ever possible if the rest of the world is real enough to forget about. 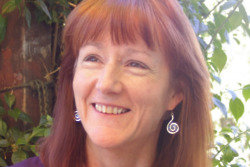