The Commonwealth Games in Birmingham are fast approaching, and triathlete Sophie Coldwell is feeling the excited already, but knows that the nerves and butterflies in the stomach are coming. This will be Coldwell’s second Commonwealth Games, but it’ll be the first one where she has real aims of bringing back medals and making her country proud.

Ahead of the start of the tournament which gets underway at the end of July, Coldwell spoke to Female First about how her passion for triathlons started, explained how it feels to represent her country on the world’s stage and revealed why her mum is her biggest inspiration.

Q) When did your passion for triathlons start?

A) It’s really hard for me to say exactly when because I’ve been doing it for 19 years now so it’s quite a while. But basically, I started when I was eight years old, I was always a pretty active kid at school and then my mum saw a local triathlon advertised at one of the leisure centres near us, so she took me down. At the time, I couldn’t even swim 50m front crawl, so I had to do one length front crawl, one length backstroke. I didn’t have a tri suit, so I just used one of my mum’s big t-shirts, I had a mountain bike which probably weighed twice as much as I did at the time. But I just loved it and I think when you’re a kid and you win a trophy, it’s quite an inspiring thing for yourself when you’ve done that.

Then I worked my way through junior races and up to domestic level racing and I was a junior doing international stuff. I think the first time I got my first GB tri suit, I went as a travelling reserve to a European relay. I remember getting in the tri suit and just having Coldwell written on it and GBR and I remember thinking 'oh my God this is so cool!' That’s probably the first time I thought 'oh wow, I really could race for GB' and race internationally and properly race, not just be there as the reserve, I think I was 15 at the time.

Then you start going to championships events and pick up a few medals and you earn a bit of prize money and then it’s like 'oh maybe I could do this full time'. I suppose it just snowballed really from being eight years old and running around Clifton leisure centre to it being a full-time job and something I probably would have only dreamt of as a youngster.

Q) How does it feel when you represent your country at international tournaments?

A) It's probably an amalgamation of lots of feelings, if I think back to the that first time, I did get a suitcase full of GB kit and there’s nothing else you can really compare that to. You’re representing your whole country and you’re part of a select few that get to do that. I was obviously super excited; the excitement probably took over from the pride that I felt when I was 15/16 whereas now I definitely am proud to do it and continue to do it.

There's pressure because you want to do well but I don’t sit there and feel pressure because I’m doing it for GB, I just want to do well so it’s more of like a pride thing that you’re like 'wow I’m good enough- I get to represent GB' at different events or England at the Commonwealth Games, or wherever it might be. It was excitement when I started at 15 to more of a pride thing now.

Q) What was it like to compete at the Commonwealth Games in 2018?

A) The Commonwealth Games in 2018 was probably an event that I was selected at, it was more of a development phase rather than going to try and win a medal which is probably the difference this year as my aims are to come back with a medal. Also, for me in 2018 it was a real shock to be selected at the time. I remember thinking this is your opportunity to absorb as much as you can, and I was rooming with Vicky Holland who two years before that had won the first female Olympic medal for GB. I’m obviously good friends with Vicky more so now but she was definitely more of this superstar that you look up to. We room shared and I remember thinking- just learn what you can and take what you can from this experience.

That was definitely a huge steppingstone for me in my career- going from someone who competed internationally to now being selected for major championship competitions. Hopefully this year with Birmingham will be another big steppingstone towards better and bigger things.

Q) How are you feeling about this year’s Commonwealth Games in Birmingham?

A) It’s one of those things where I’m feeling so excited for it because there’s not many occasions in an athlete’s career that you’ll race in a major championship on home soil. We had London in 2012 and now we’ve got this, and this might be the only time that I get to do it. I know how amazing it is and we’ve had triathlon events like the Leeds World Series event and the crowds are just… I literally just can’t put into words how incredible it is, you can’t even hear yourself, it’s unreal. I wish you could just bottle that up and share it with people because it’s just incredible.

I’m obviously super excited for that but I know as soon as we get closer to the games, the nerves will definitely kick in. I really want to do well there and I’m yet to win a major championship medal and it would just mean so much to me to be able to do that. I know how nervous I’m going to feel but I’m just excited at the moment. I’ll just ride with that emotion until we get closer to the time.

Q) Are you proud of your achievements so far or are you always looking ahead to the next thing?

A) It's difficult because I think if I was to retire tomorrow and look back on my career, I would be proud of what I’ve done. I’ve managed to get some world medals, I’ve been a European champion, I’ve been to the Commonwealth Games- so I probably would look back and think not everyone manages to do that and I would be proud of it. But I also know how much I want to go to an Olympic Games; I know how much I want to win major medals. I am proud of what I’ve achieved but I definitely don’t dwell on it that much because I know I want to achieve more.

Q) What would you credit your success to?

A) My mum has been a big influence for me and growing up. She was a single parent and sacrificed a lot for me and my brother and I thought- don’t waste this opportunity. The amount that she’s put into this- that probably drives me. And now making her proud is such a big thing for me.

We got asked before the Commonwealth Games, who do you want to bring it home for? And I said I’d love to be able to bring it home for my mum and that for me would be a huge thing. I know she’s proud of me whatever happens- whether I go on to achieve more things or not. 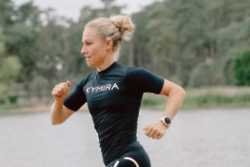 Raya Hubbell: 'Triathlon in a way really saved my life' 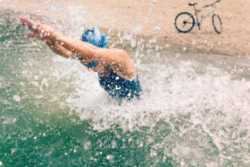 Sporting Dream Interpretations: What does it mean to dream about a triathlon? 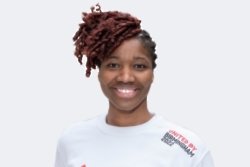