Witching Hour: What is it with witches and black cats?

Why is the black cat such an iconic witchy symbol?

Of all the stereotypical symbols associated with witches, the black cat is one of the most common. Every Hallowe'en, thousands turn out their best black cat costumes for Trick-or-Treating, and feline silhouettes decorate shop windows in the form of decals and bunting. But where did this black cat mania come from?

It's common knowledge that Ancient Egyptians worshipped cats, and more often than not, sculptures and artwork portrayed them as being black. They were seen as divine with mystical powers. Cat deities Mafdet and Bastet were also black. However, Celtic folklore seems to have a few mixed messages about black cats. Some Celts believed cats were reincarnated humans who had done bad deeds in previous lives, while others believed that a black cat entering the home signified prosperity. One popular story is the tale of the Cat Sìth, which speaks of a spectral black cat with a white spot on its chest haunting the Scottish Highlands.

It's not surprise then that much of Western history depicts them as evil omens. Black cats are often seen as the stereotypical witch familiar; that is, an animal housing a spiritual entity that helps the witch with her spellwork. The term "familiar" is not suggestive of malevolence in itself, but certainly during the 14th and 15th century witch trials a familiar was synonymous with demons or the Devil himself, or else a spy for dark forces.

In fact, in colonial America people would actually be executed if they were seen with a black cat, and in Europe black cats were routinely killed. Of course, given the Black Plague pandemic, this turned out to be rather a bad idea as less cats were around to kill the rats that were carrying the disease. At the height of the witch panic, black cats were also seen as shape-shifting witches at worst - at best, an omen of bad luck and even death, particularly if the cat crossed your path. Although, in the UK, a black cat crossing one's path more commonly fortold good fortune.

Other cultures have their own ideas about black cats; the Japanese see cats as important companions for single women as they would attract suitors; a strangely contrasting idea to the Western "mad cat lady" archetype, to which many happily single women aspire to be.

Cats have all kinds of magical mythology surrounding them aside from superstition. For example, there's the popular concept that cats have nine lives - an idea that has no solid origin, though is thought to be related to the Egyptian god Atum-Ra or else coming from China where the number 9 is considered lucky. In other cultures cats have seven lives (Spain) or six (Turkey).

Nowadays, those identifying as witches still favour cats; whether out of a love of the traditional aesthetic, or purely because cats make excellent companions. Indeed, as pets they are affectionate and lovable, even when they are also haughty and aggressive. 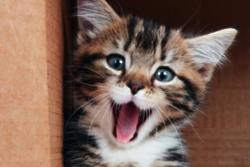 15 things you never knew about cats