Everything you need to know about World of Warcraft: Shadowlands

Who would’ve thought that World of Warcraft would be gearing up to release their EIGHTH expansion, inviting players back for yet another unforgettable adventure through new zones and an entirely undiscovered frontier? With a release date finally revealed for the end of October, we’ve decided to do a deep dive into everything Blizzard have announced in regards to the new title; here’s everything you need to know about Shadowlands!

Remember: You will need World of Warcraft: Battle for Azeroth as well as an internet connection, Blizzard registration and the Blizzard Battle.net desktop application to play.

What story will Shadowlands tell?

After watching the stunning November 2019 cinematic for Shadowlands, millions of WoW fans knew that they were in for a treat.

Containing the threat of the Scourge was a mission players were tasked with all the way back in 2008, with WoW's second expansion Wrath of the Lich King. The expansion ended with Bolvar Fordragon, who had served as the Regent of Stormwind and the commander of the Alliance forces during that time, being crowned as the new Lich King. It was a dangerous role, but one he felt he had to take so that nobody could steal the power that the Helm of Domination possessed.

This imprisoned him at Icecrown Citadel but, as you’ll see in the film above, he has been bested by the Sylvanas Windrunner. Although she at first looks to want to claim the Helm for herself, she rips it apart, tearing the veil between life and death and granting access to the afterlife, otherwise known as the Shadowlands.

This undiscovered universe plays home to all those who have been departed, with the normal order taking them from their original lives, but placing them in the Shadowlands in a role appropriate to the one they had in the real world. 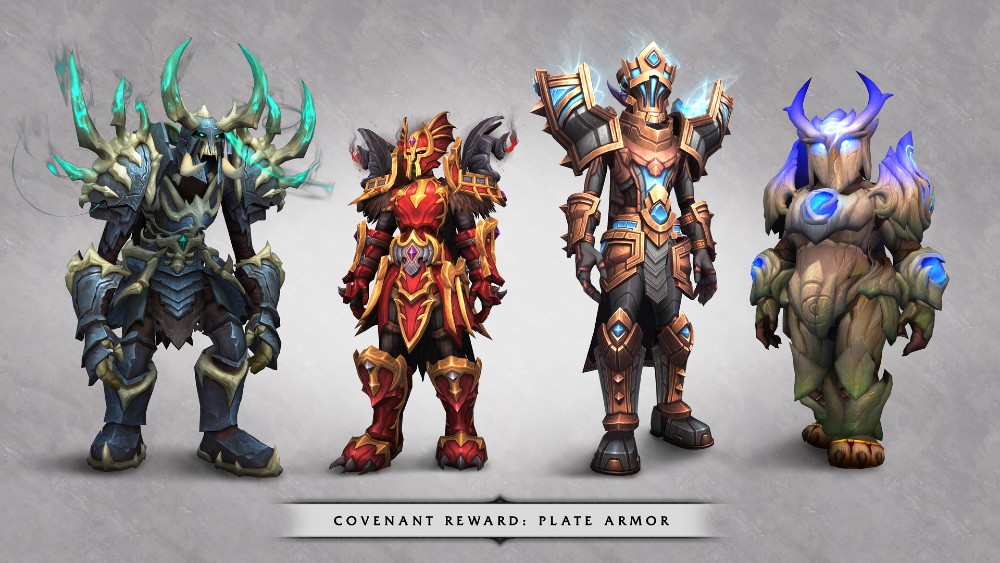 Each of the four different Covenants featured in Shadowlands will be introduced to players as they progress through the expansion's story. When you've reached max level, you'll be able to join one of them and gain access to their exclusive awards.

Once you've progressed through that story and maxed out your first character in Shadowlands, you'll be able to choose a Covenant on other characters right from level 50.

Whether you decide to go with Kyrian, Venthyr, Night Fae or Necrolord, there's plenty of end-game content once you've maxed out your level to keep you going.

Which new zones can I explore?

There are a total of five new zones, all with unique scenarios and features, that you’ll be able to travel across during your time with Shadowlands.

Bastion: Ruled by the Kyrian Covenant, Bastion is one of the Shadowlands' ruling realms, with pristine spires and crystalline skies. Souls that are sent to Bastion are done so to examine their lives, relieve themselves of their burdens, and work towards a state of virtue so that they can eventually ascend. Once they've done so, they'll become kyrian - messengers, couriers and pure souls in the realm of the dead. 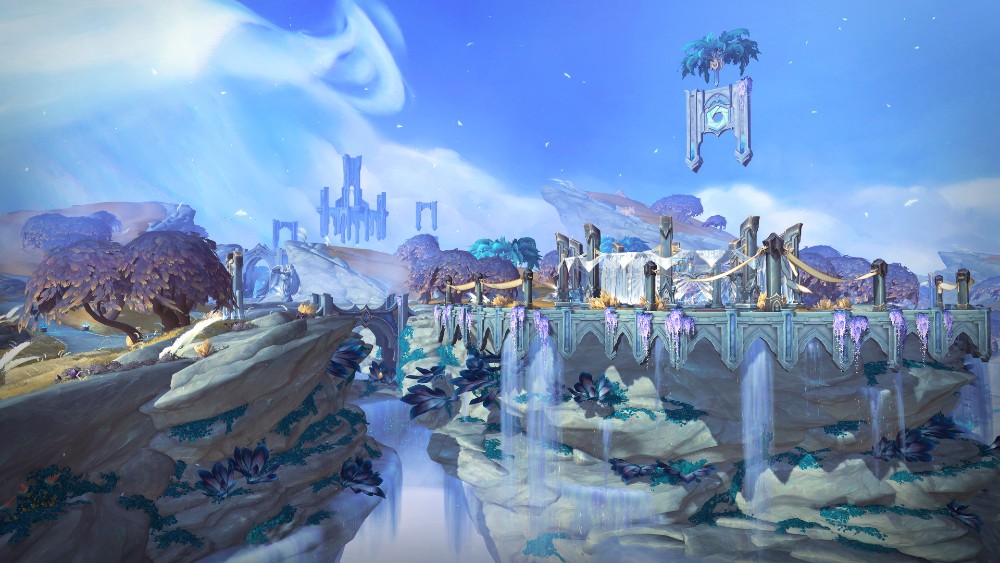 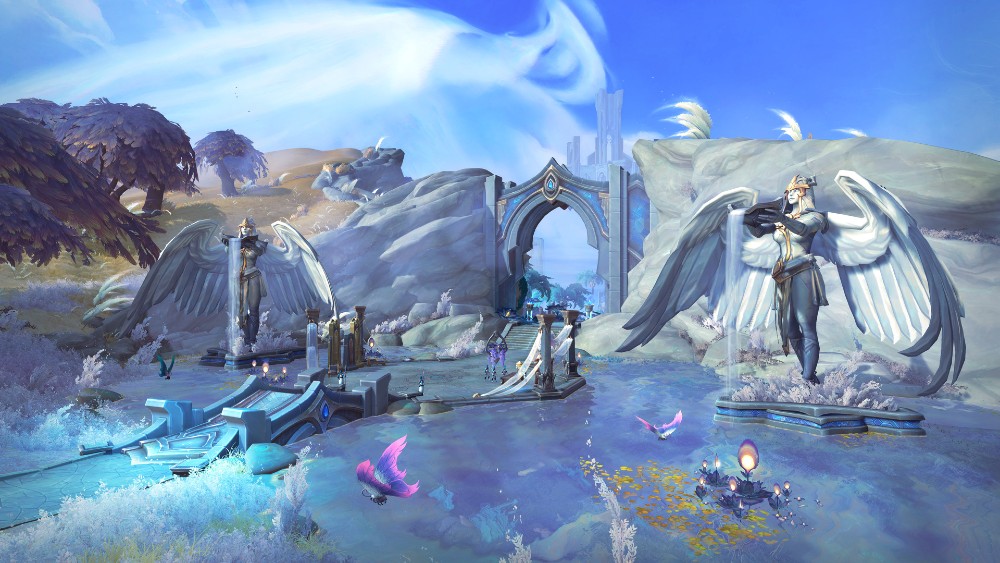 Maldraxxus: The Necrolord Covenant rule Maldraxxus, which represents the Shadowlands' military. It's home to wicked souls, but not everybody who goes there in the afterlife is evil. The Necrolords welcome good men and women who have warlike characteristics, and those who are willing to fight again for greatness can find a home here. Those who prove they're worthy can be turned into undead soldiers, before being used to defend the Shadowlands from the enemies of death. 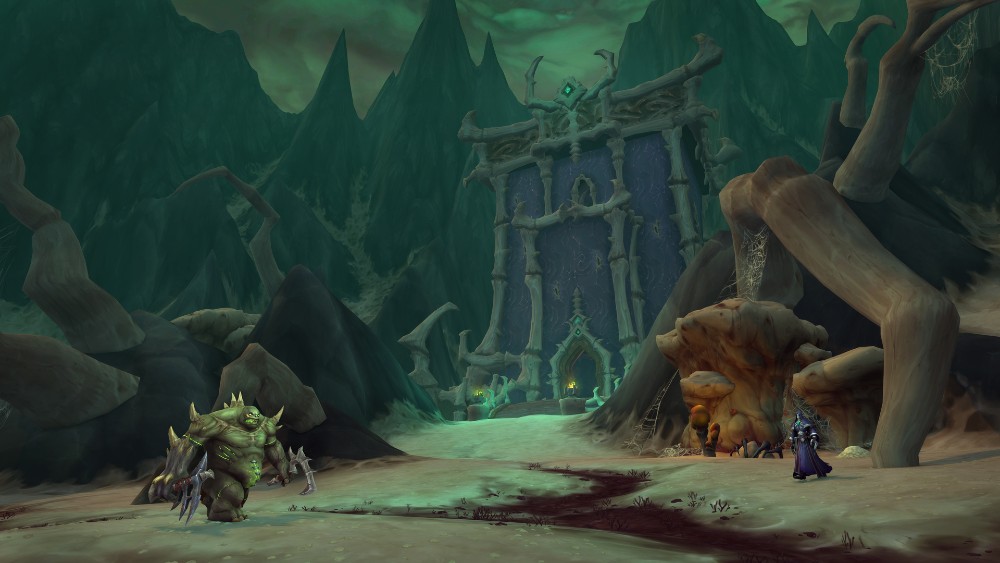 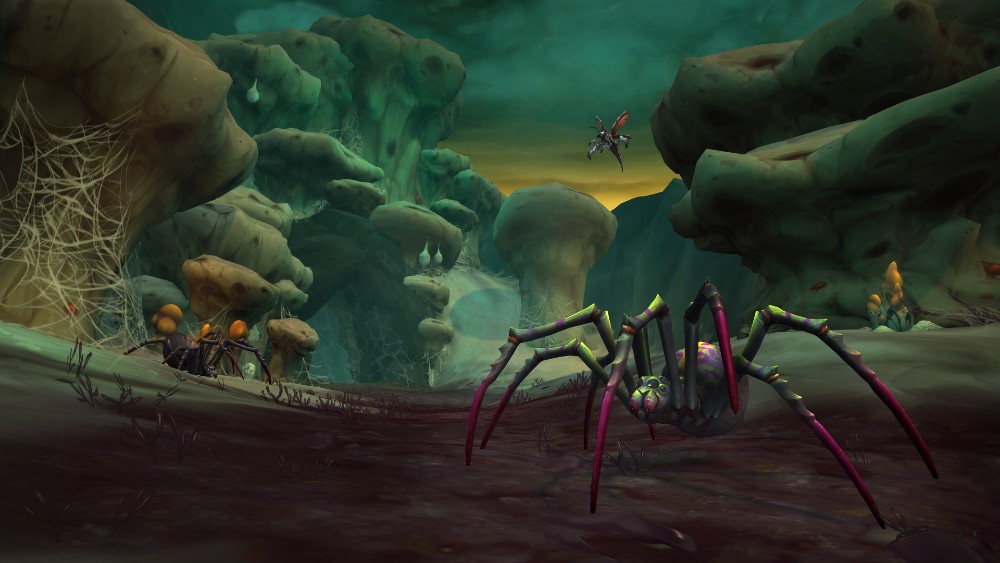 Ardenweald: The Night Fae Covenant inhabit Ardenweald, following its initial founding by the Winter Queen. This mystical enchanted forest is where Wild Gods and other nature spirits travel following death. Tree dreams are scattered across the forest, bringing in anima which is harvested by the Night Fae and used to rejuvenate the spirits inside wildseeds, preparing them for rebirth in the world of the living. The realm also allows mortal souls such as druids and hunters an afterlife, giving them the choice of an animal form upon arrival and allowing them to serve for eternity caring for the wilds. 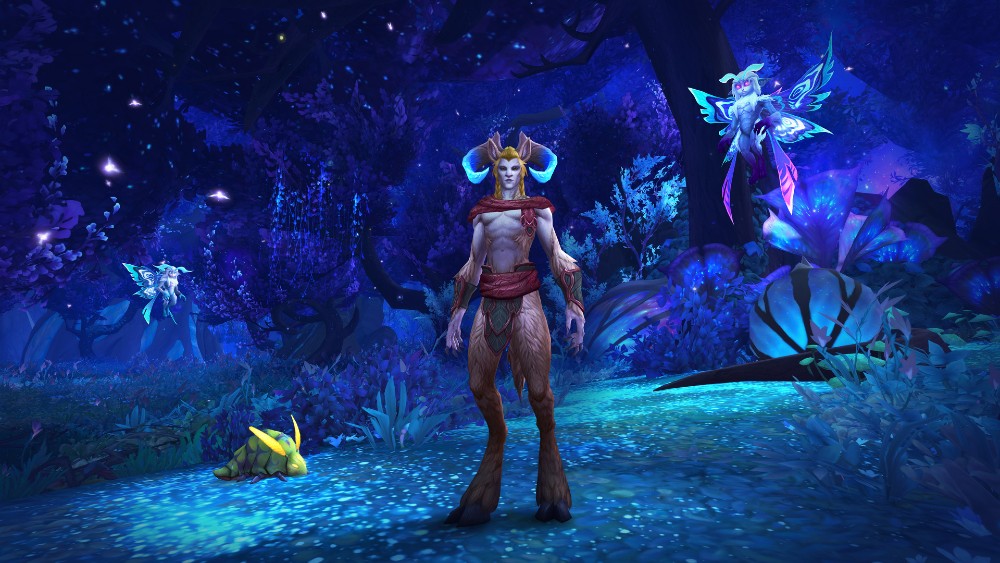 Revendreth: The Venthyr Covenant inhabit Revendreth, which was founded by Sire Denathrius. Gothic spires are dotted across the setting, and any soul who knows their worth doesn't want to end up here. Those who do tend to be prideful or have flaws that stop them from serving elsewhere. Revendreth offers redemption, but only to those who can earn it. 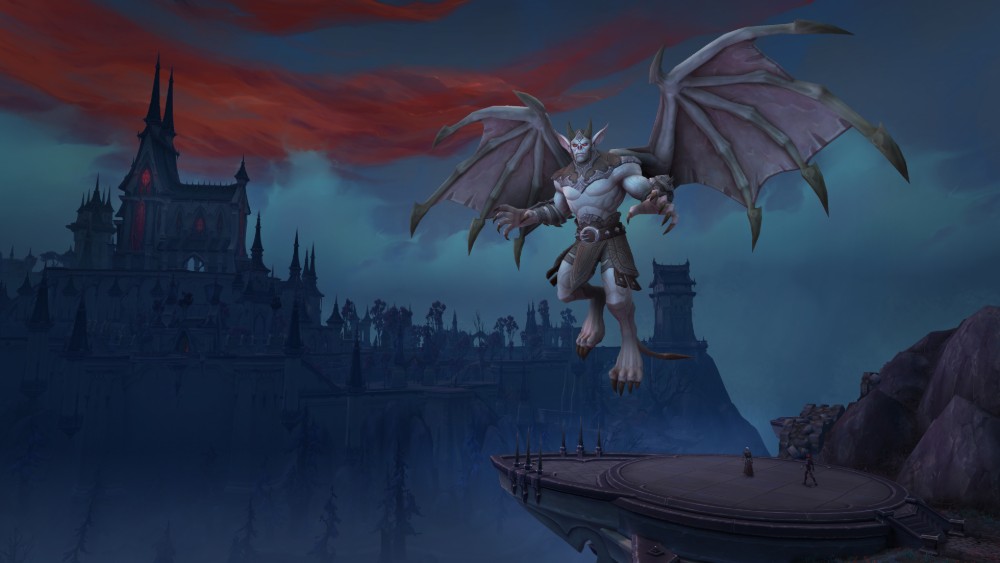 The Maw: The vilest, most irredeemable souls in existence are sent to The Maw upon death. They're not allowed in any other zone due to being a danger to those there, and are ruled over by the Jailer, who nobody has ever seen. No escape from The Maw has ever taken place, and those who have ventured into the zone have never been heard from again.

Oribos will serve as the crossroads between life and death for those who are going to the Shadowlands. As you can imagine, it’s a place packed full of interesting characters! One of those is the impassive Arbiter, who judges the dead before sending them to their final resting place.

Dungeons, raids and The Tower of the Damned 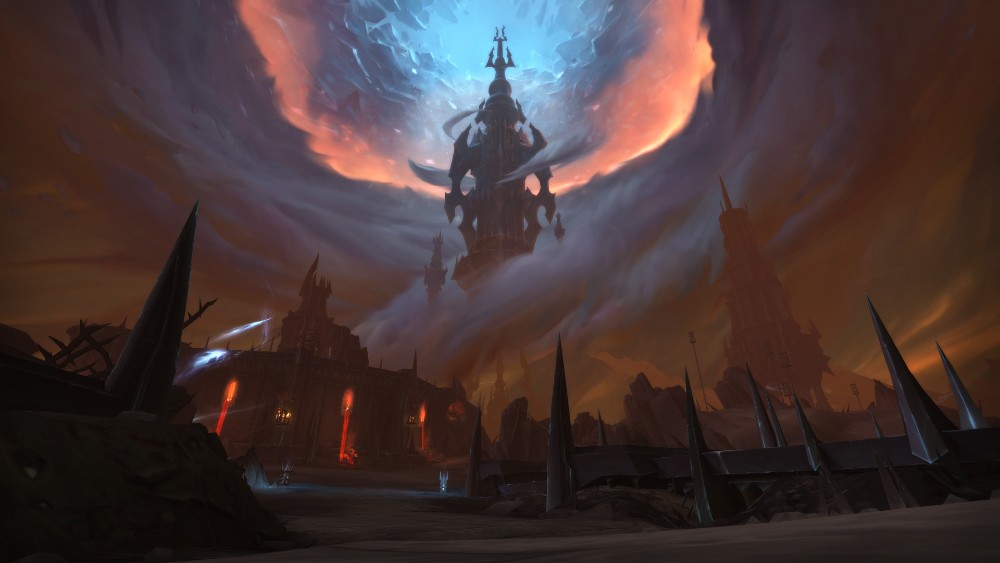 Along with the usual dungeons and raids is a brand new addition, with an infinite dungeon called Torghast, Tower of the Damned. This eternal prison is where the most dangerous souls from the universe are kept by the Jailer, and where some of Azeroth's greatest heroes will be trapped, seeking rescue from you and a group of warriors willing to put their lives on the line.

This ever-changing, endlessly-replayable dungeon is one you can even go through alone if you think you're up for the challenge. Unique abilities and items will be granted to those who defeat enough of the challenges Torghast throws up, and legendary materials can be found if you progress deep into the tower.

How does the new levelling system work?

We wondered how long it would take before Blizzard decided the levelling system should be reworked! Now, players will level up to level 50 before heading to the Shadowlands, where there's a new max level of 60.

The experience granted makes it faster than ever to prepare for the latest challenges, with all expansion zones now able to scale to you and your friends while you level to 50. This makes it easier to play in zones you've never ventured to before!

From levels 1 to 10, new players will embark on an introductory tutorial voyage of sorts, learning everything they need to know about Azeroth. There's even a mini-dungeon to take part it!

Levels 10-50 can either be played in seventh expansion Battle for Azeroth, or gamers can go back in time and tackle any other expansion they may fancy tackling. This scales characters so you can level up with friends.

From 50 onwards, the Shadowlands await.

Which edition should I go for? 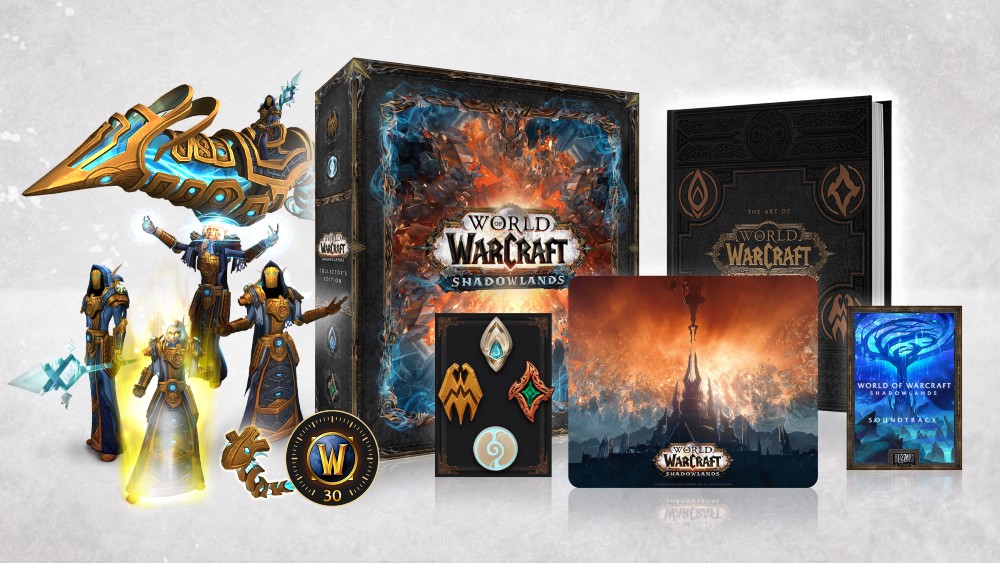 As is usually the case, there are a number of different editions available that you can pre-order today. Each one is tailored to a certain type of player, so take a look at what’s on offer and choose what’s best for you!

Base Edition: For £34.99, you get a pre-purchase of the expansion as well as early access to Death Knights for Allied Races and Pandaren. Players who own this edition may also begin the Vestments of the Eternal Traveler quest by seeking out another player who owns either the Heroic or Epic Edition of Shadowlands.

Heroic Edition: At £49.99, the Heroic Edition gives you everything in the Base Edition along with instant access to a Level 120 Character Boost, as well as the Ensorcelled Everwyrm flying mount. This is the mount players will need to trigger the quest for the Vestments of the Eternal Traveler transmogrification set.

Epic Edition: The top tier Epic Edition gives you everything you'll get in the Heroic, with some special added extras. They include 30 days of game time, the Anima Wyrmling pet, an otherworldly Eternal Traveler's effect for your Hearthstone and, Illusion: Wraithchill; a cosmetic effect for your weapon.

What are the system requirements?

If you're playing on a Windows system, you'll need Windows 7 64-bit or above, and an NVIDIA GeForce GTX 760 2 GB, or AMD Radeon RX 560 2 GB, or Intel UHD Graphics 630 (45W TDP). Shadowlands will also require a Solid State Drive (SSD) 100GB available space or Hard Disk Drive (HDD) 100GB available space. Keyboard and mouse are required, as well as an Intel Core i5-3450 or AMD FX 8300 processor. Memory-wise, you'll need 4GB RAM, or 8GB if using supported integrated graphics, and at least a broadband internet connection. Resolution should be at a 1024 x 768 display at minimum.

When will the game be released?

World of Warcraft: Shadowlands is officially released on October 27th, 2020 at 12AM CET.

MORE: Check out the concept art and character designs for World of Warcraft: Shadowlands 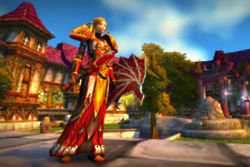 World of Warcraft Classic is a trip down memory lane, where the trolls come out to play

BlizzCon 2017: Detailing World Of Warcraft’s Next Expansion Battle For Azeroth 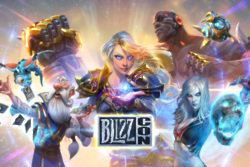