2K have today (July 14) announced their plans to release the NXT Edition of WWE 2K17, limited to 50,000 copies across the globe and celebrating the success and popularity of NXT.

Known for developing the WWE's emerging Superstars, NXT has really paved the way for some of the company's now biggest names to step into the spotlight and shine.

Available for the PlayStation 4 and Xbox One, this special edition will be sold exclusively in the UK from GAME for a suggested retail price of £79.99. Those in the Republic of Ireland can pick it up from GameStop for €99.99.

Those who purchase the game will not only get a 50% boost to their customised Superstar's progress in MyCareer mode, but will be granted exclusive access to play as NXT's very own Nia Jax, Apollo Crews and Shinsuke Nakamura.

Real-life goodies will also be included in the form of authentic live event ring canvas and an eight-inch lifelike Finn Balor figurine.

"The WWE 2K17 NXT Edition is the perfect way to share the passion and enthusiasm of NXT with our fans around the world."

"The brand absolutely deserves an NXT Edition for WWE 2K17, and this comprehensive offering of exclusive collectibles and in-game content is a must-have for any WWE or NXT fan." 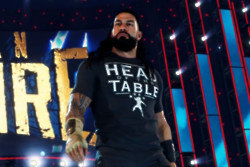