Women are constantly obsessing over their body image

Thanks to the media and the itsy-bitsy stars we see every day there is an immense pressure on us to look good, and sometimes that means super skinny.

We're forced to compare ourselves to stars with perfect bodies and complain about the fact that we don't really look like them.

New research has now revealed that seven in ten women are so anxious about the way they look they fret about their weight three times a day, with a staggering 80 per cent of Brits saying they're depressed by the appearance of their own body.

The study found actress Cameron Diaz's legs, reality star Kim Kardashian's bottom, model Gisele Bundchen's flat stomach and singer Jessica Simpson's bust are considered to be 'ideal' and the desire to look the same appears to be having a serious impact on the way women look at themselves.

The ‘Dare to Bare’ study conducted by Travelodge surveyed 5,000 British adults to investigate the nation’s views on their bodies and their attitude to fitness; following customer feedback on incorporating keep fit facilities across the Company’s hotels.

Key research findings revealed tummies is the nation’s number one body worry with three quarters of British adults admitting they are carrying a two pound unwanted spare tyre around their midriff. An astonishing 80% of British adults and women reported the appearance of their body depressed them.

The fact that women have body-image issues is a familiar one; however Travelodge’s research revealed that 73% of women on average think about their weight and body size at least three times during the day. Eight out of ten women reported they lives would improve considerably if they felt happy about their body. Over a third of women reported their love lives would be so much better if they felt better about their body. For women, legs were second to bellies in the body-worry charts with bottoms coming in third place.

The report also revealed it’s not just women who obsess about their appearance, a whopping 78 per cent of men hate their physique and 56 per cent of men regularly discuss their bodies with friends with the main topics of conversations being around: beer bellies, measly muscles, baldness and "man boobs". After their tummies, arms and shoulders were cited by men as ‘trouble spots’.

Further findings from the survey revealed whilst women are usually preoccupied with losing weight and reducing their dress size for men it's all about building muscle mass and looking "ripped", with a toned "six pack".

The research also revealed that 57% of adults find it hard to stick to a keep-fit regime whilst away from home due to lack of facilities. Forty cent of Britons said they find it very difficult to resume their keep fit regime after they have been away from home due to the lapse of not exercising and it can take them up to two weeks to get back on track. Eighty seven per cent of respondents surveyed thought it would be a good idea to have a simple-to-follow fitness video in hotel rooms to use when travelling for business or leisure.

Travelodge spokeswoman Shakila Ahmed said, “We are living in a celebrity obsessed culture where image is everything.” 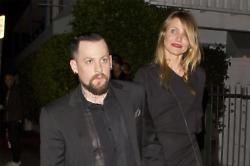 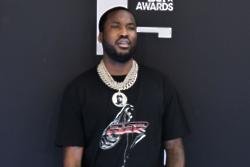 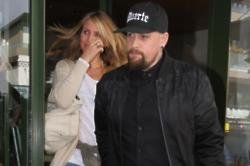 'It's been heaven': Cameron Diaz on motherhood