Lena Dunham wants to see more curvy bodies like "Kim Kardashian has been up-sized" to encourage body positivity at all sizes. The 'Girls' creator wants the body positive movement to shine a light on a range of shapes and sizes instead of just highlighting the "privileged few" with figures that society deems ideal.

She told The New York Times: “The thing that’s complicated about the body-positive movement is it can be for the privileged few who have a body that looks the way people want to feel positive.

The 34-year-old actress - who underwent a hysterectomy after suffering with endometriosis and also has rare disorder Ehlers-Danlos Syndrome - is proud of her assets but insisted she doesn't fall into the above box, because if she posted a nude snap on social media, people wouldn't admire her "beautiful derrière".

She explained: “I have a big stomach, I always have. That’s where I gain my weight — especially after early menopause, I have a straight-up gut, like an old man — and that’s not where anybody wants to see flesh. It’s not like if I posted a sensual nude of myself on Instagram, people would be marvelling at my beautiful derrière.”

Elsewhere, Lena explained why she wanted to prove that bigger women have a "sense of humour" too, with her new playful clothing line with size-inclusive retailer 11 Honoré.

She added: "What I really love in fashion is a certain level of playfulness and winky intelligence that people just don’t think bigger women want or understand. No one thinks plus women have a sense of humour, and if they do, it’s, ‘We’re going to put a watermelon on your skirt, you sassy girl!’ None of it has subtlety or true sophistication." 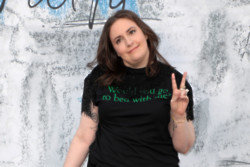 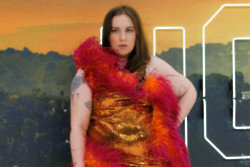