A Thousand Kisses Deep sees Dougray Scott team up with Jodie Whittaker and Emilia Fox for this exciting thriller.

The film is the first directorial outing for Dana Lustig since Wild Cherry back in 2009 and it is only her fourth cinema feature film.

And we have two clips for you to take a look at before the film hits the big screen this Friday.

We haven't seen Scott on the big screen since My Week With Marilyn as he has been mixing his movie work with TV and has shot Sinbad, which will be screened later this summer.

As for Whittaker has career is on the rise with roles in Attack The Block and One Day as well as TV series Marchlands in the last twelve months.

Returning home from work, Mia (Whittaker) witnesses an aged woman leap from a window. Scattered around the old woman’s broken, lifeless body Mia discovers shredded pieces from a beloved photograph of herself and her former lover Ludwig (Scott).

Highly unnerved, Mia begs Max (David Warner), the buildings’ all knowing custodian, to let her into the deceased woman’s flat.  While inside this strangely familiar place, Mia recognizes the contents as her own.

Confused and disturbed by what lies before her, she bolts back and forth in time where she is forced to realize it was her very own life that ended before her.

Now, the only way to safeguard her future is to go back to her past and confront the man she loves deeply but dreads most. 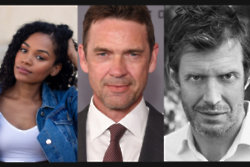