Despicable Me: Creating The Minions

Despicable Me: Creating The Minions

Despicable Me hits the big screen this week and looks set to be a huge success. Surrounded by a small army of minions, we discover Gru is planning the biggest heist in the history of the world. He is going to steal the moon.

Gru delights in all things wicked. Armed with his arsenal of shrink rays, freeze rays, and battle-ready vehicles for land and air, he vanquishes all who stand in his way.

Until the day he encounters the immense will of three little orphaned girls who look at him and see something that no one else has ever seen: a potential Dad.

Born out of the animation process were the scene-stealers the production came to know as Gru’s minions.  Though not in the original pitch, the adorable (yet incredibly mischievous) minions quickly became favorites for the animators as they built Gru’s world.

Renaud laughs: "Minions tend to work best when there are at least 20 of them.  So that’s 20 more characters to animate.  Almost every scene with them became a crowd scene, which was technically very challenging."

According to producer Healy, the minions represent 'a melding of the wonderful talents of each director.'  She commends: "They are a result of the special collaboration of two of the nicest and most talented directors one can hope to work with.

"Chris conceived their initial design and their mission as Gru’s underground mole people, and Pierre added the silly animation style and most of the voices.

"But the directors brought these characters to the screen together and had huge fun defining them.  The result is wonderful comedic moments that add another layer of interest and humor, and it came from the deeply funny brains and imaginations of Chris and Pierre.

"Once they gave them names and special funny hairstyles, and decided who was a monoc or a binoc, the personalities of the minions started to emerge.  I had trouble remembering who was Jerry or Dave or Tim, but the directors always knew.

"The scenes just kept getting more special, and the fact that all minions are similar is what makes them funny."

The voices of the workers were largely the creation of Coffin. While the team was pondering different vocals they could give the creatures, Coffin came to work one day with a voice test the entire crew loved.  They compressed the sound, and the minions were born.

The two men subsequently designed a language for Gru’s army that is intended to be an indescribable vocal expression, and the directors and New Zealand actor Jemaine Clement split up the voice work.

Coffin worked with his fellow director to develop the complex language for the minions. To help us understand them, every once in a while a word of English sneaks out during a scene.  Renaud and Coffin discovered how to compress the sound of their voices so that they were able to tweak slightly both their and Clement’s voices for each little guy’s vocals.

"The language is much more about sound than it is about any kind of meaning," says Meledandri. "Pierre works very quickly to present his ideas visually, and not just in a still form.

"He’s much more comfortable communicating an idea by bringing it to life with some limited animation.  From the very first time we were introduced to the idea of these characters, they were immediately appealing.

"We had a sense from day one that the minions were slowly going to try to take over the movie; they’re irresistible in their combination of innocence and mischief."

Adds Cohen: "They’ve created this incredibly unique language for the minions, where a lot of times it sounds like it’s gibberish.  You hear all kinds of languages being incorporated into the way they speak. Then occasionally, you’d hear a word or two of English, and that gives you a sense of what the minions are actually saying."

While the comic actors improvised certain lines in the film, it was Steve Carell who actually helped to name the minions.  During vocal sessions as Gru, he would throw out a name to the minions, such as Dave or Tim.

Though there were tons of them, and many look the same, Carell knew that Gru would know each of his happy workers by name.  Once the directors heard Carell calling them out by name, they thought it was a terrific idea to give several other of the minions names that would match their unique personalities.

Despicable Me is out now.

Tagged in Despicable Me 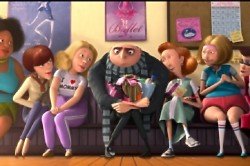 5 Movies You Can’t Miss on TV This Christmas 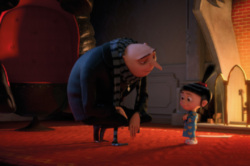 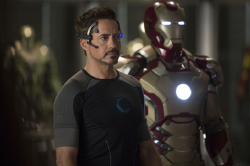